Dallahan - When the Day is on the Turn 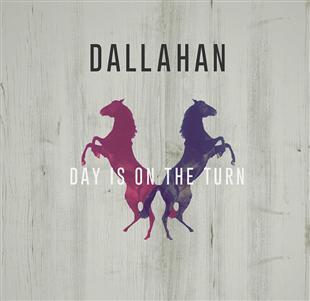 With an impressive line-up of five very talented traditional folk musicians (on guitar, fiddle, tenor banjo/mandolin, accordion and double bass) one would expect the foot-stomping jigs and reels that abound in Dallahan’s first full-length album, but it’s their meticulous arrangements and seamless integration with each other’s playing that make When The Day is on the Turn so ear-catchng.

The opening eponymous track begins with a pulsing guitar line that leads into a bubbling blend of tenor banjo and accordion in a masterful rendition of Sinfully Delicious, a self-penned tune. It’s followed by a comforting but wistful traditional song about midwinter.

There are several instrumental tracks, such as Maggie’s Jigs (including a fantastic version of the traditional tune An Grianan) and The Tartar Frigate.

Spicy Shoes is a particularly fun track - with elements of jazz and improv, it almost sounds like an extended jam session. Far from becoming dull, it’s a wonderful experience to hear such accomplished musicians playing off each other.

While rooted in Scottish and Irish traditional music, the band also play Eastern European folk, such as a set of Romanian tunes in the final track Hurley’s House, and the traditional Transylvanian song Volt Nékem Szeretöm (rendered in English as The Chosen and the True).

The album is only about a third songs, but they are carefully selected - traditional lyrics to simple, memorable tunes, beautifully arranged and sung by Jack Badcock in a modern yet somehow eternal style.

Take Katy Dear, a haunting song about a girl whose parents seem hellbent on destroying any chance she has at love, to the point of sleeping with daggers in their hands, ready to stab any potential suitors. Badcock’s warm, hearty voice might at first seem at odds with the subject matter, but there is a subtle mournfulness to his rendition that perfectly complements the slow, soaring arrangement.

The wild horses strutting across the cover art of When the Day is on the Turn exemplify Dallahan’s talents - wild and free yet precise and flawless. As a debut it’s a bold stroke on the teeming trad folk landscape, one that promises great things to come, and as a listening experience it’s a true pleasure.

Self-released on December 15th 2014 and promoted by Will McCarthy Music Promotions. Engineered by Jani Lang, Ciaran Ryan, Jack Badcock and Ian Thomson; mixed and mastered by Jani Lang. Produced by Dallahan. Photography by Sean Purser and artwork/design by Sarah Diver-Lang.