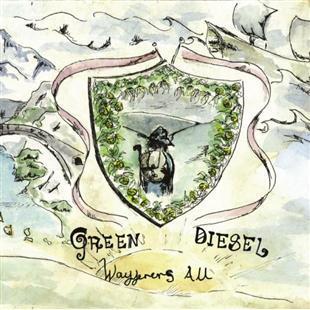 Formed in Faversham in Kent five years ago, Green Diesel trace their musical influences back to the golden era of late 60s/early 70s British folk rock, to bands like Fairport Convention and the Albion Band. Indeed, it could be argued that this album sounds more like the direct offspring of the iconic albums from that period than perhaps the output of the Fairport of today does.

Green Diesel do folk rock and they do it superbly well. A rocking rhythm section and some lovely electric guitar licks blended with a good range of traditional instruments and some beautiful vocals - all of the essential ingredients for a great folk rock album are there, not to mention a great selection of songs and tunes.

Wayfarers All, the band’s second album following their 2012 debut Now Is the Time, contains a mixture of original and traditional material. Unless one was familiar with the traditional songs it would not be immediately obvious which songs fell into which category, a mark of both the quality of band member Greg Ireland’s song-writing talents, together with the ability of the band to put their own consistent musical stamp on the songs and tunes they perform.

To Kill the King opens the album, one of five tracks written by Ireland, and it demonstrates the vocal, instrumental and song-writing talents of the band nicely. Lead vocalist and violinist, Ellen Clare, has a clear but engaging folk voice that’s perfect for this type of material. Of the traditional material, the band do beautiful versions of Mad Tom of Bedlam and May Song.

Another thing that is always pleasing to to hear on any folk rock album is a mix of female and male vocals. And Wayfarers All doesn’t disappoint in this regard either. Lead guitarist Matt Dear takes the lead vocal on his own composition, A Fisherman, Once; while the band’s arrangement of Oak, Ash and Thorn, with its beautiful choral singing from the whole band punctuated by pumping electric bass, puts one in mind of early 70s Steeleye Span.

All in all Wayfarers All is a hugely enjoyable album. An up and coming band who deserve to be much bigger, let’s hear it for Green Diesel and this enchanting slice of classic English folk rock.