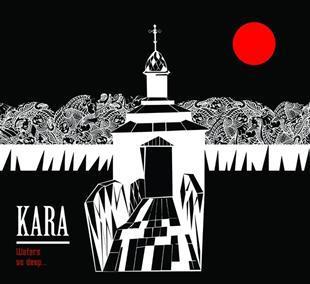 KARA: already meaning many things in many languages - and now also the name of Hertfordshire’s much anticipated folk quartet. Already making a name for themselves with their original and captivating sound, the band recently won Love Folk LIVE’s Most Exciting Live Performance award for 2014.

The four are clearly onto something rather special, especially considering that KARA are a newcomer to the folk scene. Waters So Deep, the band’s début album - with such an interesting and strikingly different combination of instruments and with new, mysterious tales to tell - is already causing a buzz, and it seems set to dazzle listeners far and wide.

KARA are Daria Kulesh (vocals), Kate Rouse (hammered dulcimer, backing vocals), Ben Honey (guitar) and Gary Holbrook (accordion). Between them, they delight audiences with a unique and exciting instrumental line up and demonstrate the ease at which they can stay true to the sounds and characters of each of the cultures they visit on the album. Special mention must be given to the addition of the hammered dulcimer, which perfectly reflects the album’s character with its clear, ringing tone, teamed with its exotic and animated qualities.

The album whisks the listener off on a tour of folklore from all over the world. Particular emphasis is given to songs which explore belief, spirituality and temptation, often giving the tracks a deeply mythical feel. The main influences are Russian and British folk traditions but tracks such as In Lille - where French context is teamed with a beautiful Venezuelan Waltz - highlight the international flavour of the band’s music.

Waters So Deep balances traditional material with self-penned lyrics and tunes with often a combination of the two being used to produce a single track. The stories and themes covered throughout the album demonstrate the band’s passion for collecting prominent stories and symbols from around the world and re-telling them to audiences through original songs.

The album also sees KARA put their own twist on some well-loved tunes, creating contrast and adding an extra level of vibrancy. Found Harmonium (which includes an appearance from Johann Pachelbel) highlights the creativity and energy of the band along with their desire to embrace all genres and traditions in order to create a thoroughly compelling album. Flying Spaghetti Monster, a second set of session tunes, is played on hammered dulcimer, allowing them to take on a different character than usual, whilst remaining brilliantly up-tempo and accessible to the listener.

KARA - charming audiences with ’make-believe’, and ’magic spells’ - are certainly a band to keep your ears out for. From foot-stomping tunes to delicate, haunting tales a little less well known, the quartet bring something completely different to folk music as we know it.

Released on 1st July 2014 on an independent label.