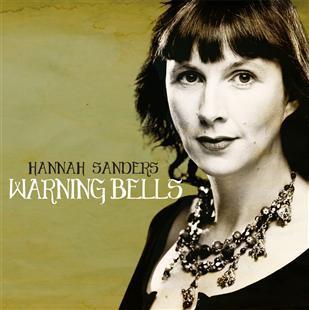 Hannah Sanders is a name which has been absent from our shores for some time, but this is all set to change as Hannah marks her return to the UK folk scene with this new EP.

For anyone unfamiliar with her work, Hannah originally performed alongside her family in a cappella group The Dunns, who toured England and further afield within Europe in the 1990s. For the last nine years, she has been over in the USA performing as a duo with Liz Simmons, and a touch of American influence can be seen making its way into this latest release.

In just five tracks, Hannah displays a range of music which features both traditional and more contemporary pieces. Her music is very much about the storytelling, and there are some fascinating tales to be heard within each song.

Canadee-i-o, the opening track, is a traditional song which in true folkie style tells the story of a young girl who turns sailor to be with her man. The arrangement of guitar and voice is simple and laid back, with the emphasis being on the words themselves.

Next comes Lucy Wan, a fast-paced tale with a twist of scandal, incest and murder (the usual cheery themes!), all played out on the unusual instrumental choice of a lap dulcimer.

Well-known song The Cruel Mother also then makes an appearance, and is slowed right down and given a relaxed tone which could well have an American stamp on it.

As well as these traditional tracks, Warning Bells also features Strange Affair, a Richard Thompson cover, as well as Beware of the Kids, an original composition by Hannah herself. The latter is a particularly haunting melody which tells the story of children lost far from home.

Overall, this is an EP which seamlessly brings together the old and the new, as well as highlighting what it all has in common: the ability to tell a good tale.