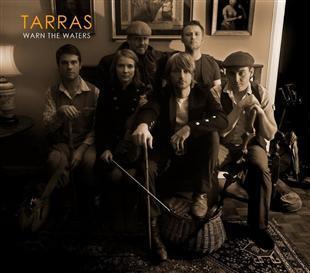 Warn The Waters is the new album from six-piece band Tarras following their reformation in 2011 after a break of more than five years.

Perhaps best-known for their 2001 album Walking Down Main Street, the new-look group features original members including Ben Murray, Rob Armstrong and Lou Peacock with newcomers Rory Connor and Michael Woodward. Hailing from Scotland and the Borders, Tarras bring together a wide range of influences into their own distinctive style.

Opening with a bright ripple of strings, The Joys of Brotherhood showcases the Tarras sound, an effortless blending of folk and blues themes. It’s clear from the outset that the band have lost nothing over the years of their break and indeed have come back with a new freshness and energy.

The lead vocals of Ben Murray are compelling, dynamic and and versatile, switching smoothly from bluesy numbers to folk standards like New York Trader. Standard has more of an upbeat pop feel, with a catchy and appealing chorus. She Won’t Wait similarly departs from the traditional and blues core of the album, being an emotional piano, strings and vocal lament.

Warn the Waters marks a welcome return from a top class folk act.