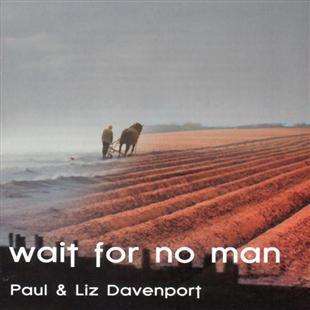 Currently residing in South Yorkshire but originally hailing from the Yorkshire coast, Paul and Liz Davenport became full time musicians after retirement from the teaching profession. Their album Wait For No Man is a collection of well researched and engaging songs, with themes firmly rooted in the concerns and dramas of those who spend time at sea and those left behind on the shore.

The majority of the tracks are sung as vocal duets in a traditional style. Accompaniments on duet concertina are sparse allowing the vocals, in the unison singing style, to dominate. Original songs blend seamlessly into the overall theme.

The style of the songs is varied, with many based around a capella duets such as in Green Broom and the 1907 setting of a Hamish McLaren poem, Leave the Sea, Johnny. A highlight is the setting of an A. E. Houseman poem about the Boer War, The Lads That Will Never be Old.

Original songs include Come, See the Boys go Round, a description of the longsword dance, a tribute to the Angel of the North in Iron Angels and the excellent Silver in the Pocket set in the midst of the 1960s decline of the herring fishery in the North Sea, the standout track of the album.

Wider influences feature in the Virginian Seven King’s Daughters and a translation of the French song, The Scent of Lillies. Stories abound, featuring the highwayman Nevinson, Boggle Hole Pirates and the ship Nightingale. An interesting album, deeply rooted in local traditions and tales.