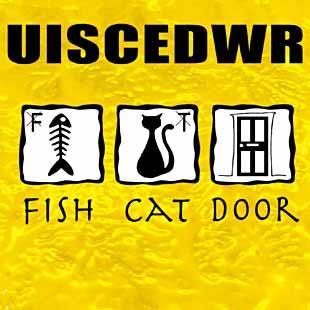 Uiscedwr are a four-piece band built around the pairing of Anna Esslemont and Cormac Byrne. With slightly different line-ups they are past winners of the BBC Radio 2 Young Folk Award in 2002 and nominees for the 2005 Horizon Award. ’Fish Cat Door’ is their third album, fourth if you include the Uiscedwr Bigband release last year.

So the band undoubtedly have some pedigree, though ’Fish Cat Door’ is my first introduction to them. The album features 4 songs and 7 instrumentals. Taking the songs first, all benefit from Anna’s slightly quirky vocals but overall they are a bit of a mixed bunch. ’Prescription Junkie’, Anna’s take on her medical woes, is undoubtedly the pick. The mix of humour and exasperation is pitched just right; it’s a song that I imagine others who rattle when they walk will be able to identify with. Alongside this, ’End of the Day’ is beautiful, fullstop. However, while ’Tip Top Baby’ is enjoyable enough, it is a little overlong, sliding into the sort of repetition which will work perfectly in a live singalong but less so on CD. And ’Neptune’, while well performed, is a fairly run-of-the-mill piece of earnest ecoism.

As for the instrumentals, I’ve said before that I’m not a great fan of instrumentals generally, unless there’s something particularly arresting about the track. Line up a series of instrumentals and I can tire of them quite quickly (there’s probably a reason why all my favourite opera tunes are overtures…). And I think that’s the problem I have with this CD. There’s nothing wrong with the tunes. For example, ’The Dirty Nine Steps’ is a promising opener and ’Sunshine’ is a fun piece. Maybe live they would have a bit more power, but as studio pieces they just seem a bit bland, and I find my attention drifting.

Throughout the album, I can see hints of a band who could be a lot of fun live. But ultimately, in this studio recording, there’s a lack of ooomph, and I was left wondering what the fuss was about.