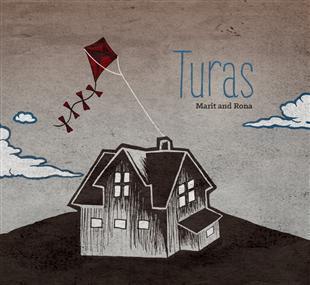 An intriguing mix of tunes from two different geographical and musical backgrounds makes up the debut album on Watercolour Music from Marit Falke and Rona Wilkie.

Initially instigated by singer/broadcaster Mary Ann Kennedy, just one listen through the album with a glimpse into the CD booklet gives an even wider account of where these two artists have gained their inspiration and on which they base their palette of sounds. In what appears to be the first time there’s been a ’creative musical union’ between the two cultures, the combination of Scandinavian and Scottish Highland tunes range from expansive neo-classical moments to reels and polkas.

With Rona taking on fiddle duties and accompanied by Marit on the cittern and the more versatile latmandola (Google informs us it’s a Swedish mandocello), the duo are supplemented by Alan Og MacDonald’s percussion and the strings of the Catilena Quartet. All contribute to the differences in tempos, tones, time signatures and the contrasting voices of the duo.

The opening trio of pieces give a full taster of what’s about to come: Fhuar Mi Pog opens the album with some gentle understated playing from the duo until the vocal slowly drifts in midway through the track alongside an insistent latmandola with the fiddle floating behind.

Tobar Tobar then begins as a quirky tune which soon turns into a lively Celtic rhythm, while for a taste of their instrumental prowess and ability to play in an extended format and mix up the genres on a couple of tunes, Kilmartin Glen Campsite moves between a traditional polka and a sprightly and sparkling Wilkie original.

There’s also the New England Fireman Set - what a great title - which borrows a couple of mid paced tunes from lauded Scots tunesmith and fiddler Paul Anderson (whose work werecently reviewed on Bright Young Folk) and stitches them together with another sprightly Wilkie original.

Another highlight is the haunting Psalm 107 which the pair have put together in an arrangement which has an Eastern tinge alongside some almost discordant cittern notes and makes the most of the sombre translation. Alongside the reels and the light hearted moments such as Rory’s Dinosaur Jumper, it shows a more ethereal side to the project.

Overall, Turas comes across as an imaginative and effective combination between two musicians who have embraced each other’s cultures to bring about a musically stimulating union.