Loreena Mckennitt - Troubadours On The Rhine 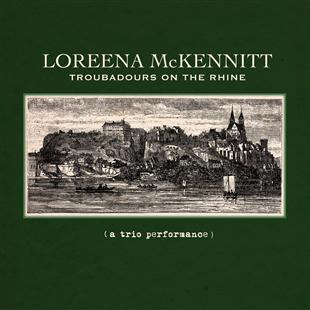 “The experience was akin to an intimate house concert that I might have performed in my living room for a handful of friends,” says Loreena McKennitt of Troubadours on the Rhine, her live album recorded in the studios of German radio station SWR1.

Intimate is the word. McKennitt, accompanied only by guitarist Brian Hughes and cellist Caroline Levelle, delivers an accomplished set, using her powerful voice to full effect.

With her 2010 album The Wind that Shakes the Barley, McKennitt made a return to traditional and Celtic material, and this session picks out a few songs from that, without relying too heavily on it. Stately opener Bonny Portmore, about the loss of Ireland’s oak forests, is an impressive start.

Despite the relative paucity of instruments, McKennitt - who adds piano and harp to the mix - and her accompanists still produce a full, sweeping sound, like a soundtrack to a Hollywood film set in Ireland.

While it’s hard to keep a good tune down - Down by the Sally Gardens, for example - McKennitt does tend towards a histrionic delivery, with rather too much wailing present on The Lady of Shalott. And while the trio demonstrate a keen musical understanding, Hughes’ cheesy electric guitar interjections have a jarring effect, crashing into otherwise-pretty instrumental Between the Shadows, adding little to Stolen Child and fatally souring interesting ballad The Bonny Swans.

The trio are at their best when keeping things subtle. With its portentous, understated strings, McKennitt’s arrangement of The Wind that Shakes the Barley is by far the most interesting thing on the album. And she resists the temptation to oversing The Parting Glass - its content is affecting enough.

Troubadours on the Rhine will delight McKennitt’s fans. The trio format allows her distinctive voice to soar and it certainly sounds like it was an enchanting concert. But the album is marred by a sense of sameyness, a hint of style over substance and, most frustratingly, those pesky guitar solos.

Released on 27 February 2012 on Cadiz Records

1. Bonny Portmore
2. Down by the Sally Gardens
3. The Wind that Shakes the Barley
4. Between the Shadows
5. The Lady of Shalott
6. Stolen Child
7. Penelope’s Song
8. The Bonny Swans
9. The Parting Glass