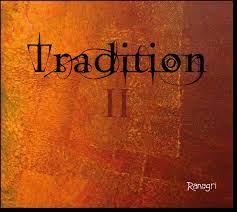 Their name taken from a small village in South East Ireland called Rathnagrew, this is the Anglo-Irish quartet’s follow-up to their 2014 album Tradition (albeit with a new line-up) and again showcases their propensity for giving fusty old songs a good kicking and investing them with new life. Inspired by life during the pandemic, the material here speaks of love, loss, separation, reunion and mental health.

It finds Donal Rogers and Eliza Marshall lining up alongside new recruits Jordan Murray on percussion and Eleanor Dunsdon, who took over on harp from Eleanor Taylor midway. Percussion is also contributed by former member Joe Danks and his temporary replacement Evan Carson adding to an instrumentation that also includes flutes, whistles, piano, bouzouki and dulcimer.

Opening with the yowl of an indistinct voice, they kick off with a six-minute restyling of The Wife Of Usher’s Well, here transformed into a steamrollering blues with repeated guitar pattern and a pulsing urgent rhythm as Rogers relates the tragic tale of a woman who sends her three sons to school only for them to die, never to return other than as ghosts. The track develops into a brief heady wail of lamentation and a percussive tribal call and response passage while Marshall’s flute adds its own eerie touch.

Her whistles are prominent for their easy-going reading of Lowlands Of Holland, giving it a much lighter touch than you’d expect from a song about a woman mourning the death of her conscripted husband away at war, the track featuring bodhran, female backing harmonies and an extended jazzy instrumental break midway, with whistles and harp trading flourishes.

Better known north of the border, The Northern Lights of Old Aberdeen isn’t traditional but was written in the early 50s by Mary Webb, a former Leamington Spa concert pianist, and her husband, for her friend Winnie Forgie who, working with her in a London hospital kitchen, was homesick for her native town. It went on to become something of a beloved anthem in its extolling of the Granite City, despite the fact Webb had never been there, and with a harp shimmering setting, Rogers achingly captures the emotion at its heart.

It’s back to the archives for The Dark Eyed Sailor, with an airy arrangement with harp, flute and whistles interweaving of the broken-token love song that, something of an exception in the genre of lovers parted as one goes off to sea, comes with a happy reunion.

They turn to the Irish songbook for Follow Me Up To Carlow, the song published in 1899 by Patrick Joseph McCall as The Marching Song of Feagh MacHugh and celebrating the defeat of an army of 3,000 English soldiers by Fiach Mac Aodh Ó Broin at the Battle of Glenmalure, during the Second Desmond Rebellion in 1580. As you’d imagine, it’s given a fairly stirring treatment with marching beat drums, harp shimmers and defiant dancing flute.

Clocking in at just under nine minutes, The Unquiet Grave has an extended three-minute introduction crafting an eerie, spooked ambience with cymbals, dulcimer, flute and harp before muted drums add their own ghostliness and Rogers brings a suitably haunted, forlorn note to the vocals as he sings of kissing lips of clay, the sound building towards the fulsome flute close.

And it’s flute that provides the muted opening frame for Polly On The Shore, a rendition that suddenly erupts into a rousing prog folk rock romp, before it ebbs back into harp-brushed pastoral soundscapes with Lowlands Away. With another lengthy intro before, at times in almost whispering mode, Rogers’s dreamily melancholic vocals arrive counterpointed by intermittent sharp plucked harp notes as, brushed by mournful flute, he relates yet another tale of separation, loss and ghostly visitations.

It’s back to Ireland, harp and bodhran for the hypnotic, staccato rhythm of Courting Is A Pleasure, also variously known as Handsome Molly and Loving Hannah. They end in swelling lullaby manner with the piano-accompanied Brid Óg Ní Mháille (aka Bridget O’Malley) an Irish Gaelic song that again laments being abandoned by a flighty lover, never to shake off her memory, with its fluttering flute bridge and the melody carrying echoes of Slane, the medieval tune written in honour of St. Patrick and which was adopted for Lord Of All Hopefulness, closing with Rogers singing in her native tongue.

Largely musically meditative, it could, perhaps, have done with something where they really let rip. But with the new roster gelling perfectly, they effortlessly confirm their status among the elite of today’s traditional folk resurrectionists.

Released on CD and digitally September 2 2022 on Goatskin Records.

1. The Wife of Usher’s Well
2. Lowlands of Holland
3. The Northern Lights of Old Aberdeen
4. The Dark Eyed Sailor
5. Follow Me Up To Carlow
6. The Unquiet Grave
7. Polly On The Shore
8. Lowlands Away
9. Courting Is A Pleasure
10. Bríd Óg Ní Mháille