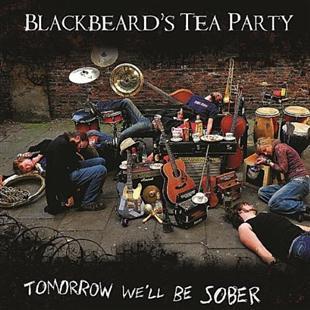 Cheesecake aficionados Blackbeard’s Tea Party got an enthusiastic response on this site for their raucous debut EP Heavens to Betsy, and they’ve kept up the energy for their first full-length album.

Feedback-soaked electric guitar heralds opening track I Can Hew, the story of a merry collier. It is soon joined by lively fiddle and clattering drums. Being bound for hell has never sounded so exciting.

The band deftly combines some of the verve and invention of Bellowhead with the kicking rock sound of the Dropkick Murphys. They’re particularly adept at instrumental tracks, as you might expect from a well-practised ceilidh band. Moonshine is an absorbing bounce-along; The Canadian Tunes zoom along at a thrilling pace with some brilliant fiddling from Laura Barber and impressive percussion, and Paul Young’s melodeon stands out on the excellent Purple Badger.

Familiar songs are given some interesting treatments, too. Thanks to some nifty acoustic guitar, Jolly Bold Robber is a delicate, baroque rocker, if ever there was such a thing. The surprisingly tender Barrett’s Privateers is given a substantial, satisfying arrangement. And Cyril Tawney’s Chicken on a Raft, which ends the album on an appropriate hangover, is wholehearted, tuneful and riotous as it morphs into traditional tune Cluck Old Hen.

More variety comes from Rolling Down the River - a contemporary shanty on the subject of 1980s Essex. And Landlord - the lyrics of which give the album its title - takes the drunken theme to its logical conclusion.

At times the electric guitar treatment feels a little dated, and occasionally singer Young’s voice is a little lacking in character to truly convince on some of the lustier songs. But these are minor complaints. Tomorrow We’ll Be Sober is inventive, witty folk rock with guts, and while die-hard purists probably won’t approve, die-hard purists never have any fun, do they?