Tailor & The Crow - To This I Will Declare 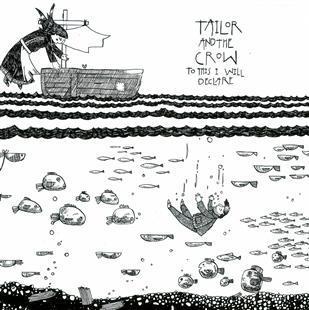 As well as having many artists trying to modernise and re-invent folk music, it is nice to have artists go back to the traditions and simply add new interpretations to songs. Tailor and the Crow certainly do this with their self released album To This I Will Declare.

What is of note about this album is how they have stripped things back down to the basics, vocals and an instrument with maybe some extra sounds added, but making sure not to add too much and over complicate things.

The sound is very exciting, almost mystical at times, particularly with Two Lovers Met, and this combined with the gentle soothing vocals makes for a unique and welcomed change in the folk world.

There is a good use of the banjo during this album, again going back to basics and giving us simple sounds played to perfection, rather than over complications. The track Under the Red Barn Floor in particular is very exciting as it builds up with the deep vocals and banjo until an explosion of sounds hits us for a few moments before cutting back to the original configuration.

It must be added, that although entirely enjoyable, there are elements to this album which can only be described as creepy. And Lay Love To Rest has a bizarre noise and a voice muttering in a way that is not easy to understand. This is a particularly haunting track, and the same goes for Candles Were Lit which somehow manages to be even more creepy.

Even the more unusual songs are extremely catchy, hours after listening you may still be humming And Christ Receive Thy Saule which has very simple vocals and sound effects but uses such power in the voices that it burns into your mind.