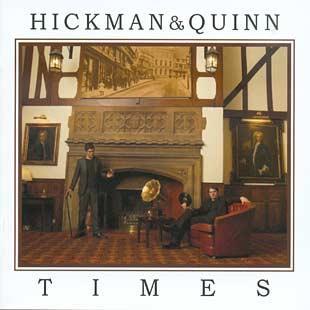 Containing self-penned tracks from the duo, and accordion from Karen Tweed, Times is the new album from Hickman and Quinn.

The guitarists have a good live reputation, with a mixture of playing styles at their disposal, and an easy harmony of their two voices. Both elements feature heavily on the album.

Hickman and Quinn travel across various styles throughout Times, from gentle folk to more Americana-tinged finger-picking. The lyrics also show diversity, with personal observation mixing with tales that seem to come direct from the folk stories of old.

In the latter form The Hanging of Jack Brown has the requisite death and misery of folk, delivered in excellent lyrics, but to accompaniment that is fairly gentle and never quite matches the grim tale.

Karen Tweed’s accordion playing on three tracks adds a variety to the Hickman and Quinn sound, and allows for a different feel to come through; something slightly jauntier. This is particularly true on White Crested Waves, where the title is evoked in the little accordion runs Karen provides.

The duo’s guitar skills are brought to the fore on The World Was Spinning Around. The finger picking is exciting, and reminiscent of bluegrass banjo, as well as calling Mumford and Sons to mind when coupled with close harmony singing.

James Hickman and Chris Quinn prevent a very slick and professional appearance with their album Times. The packaging and their website are well-conceptualised whilst also tongue in cheek. However, the tracks themselves do not convey this humour fully, and there is some vitality lacking to their performance in places. The elements of a good album are there, but not quite all together.