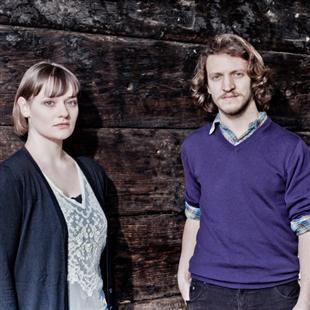 Sometimes it seems like two artists were made to play together. So it feels with the effortless ease in the combination of Tim Graham’s guitar-playing and Rosemary Lippard’s singing. Rosemary’s beautiful and pure voice is supported by Tim’s innovative and immaculate guitar for the four songs on this self-titled EP.

The two artists first came to attention when their recording of Lankin was released on the Leigh Folk Festival 2012 CD Wrecks, Rucks, Riots and Resurrection. Lankin is one of four songs on this EP and it is sung with deep, insistent and penetrating emotional intensity by Rosemary.It is the strongest song here. Guitar blends seamlessly with voice, deepening the tone.

All of these songs are familiar, sung by others and sometimes in different versions. Molly Vaughan is a tragic tale of a man who shoots his lover, mistaking her for a swan. Oysterband perform a memorable version of this song often, keeping it alive for listeners. Tim and Rosemary’s version is simpler and captures well the pathos of the unadorned narrative.

Little Yellow Roses has been recently recorded by Fay Hield, and is a song from the campfire at the Forest School Camps. Rosemary has a very different timbre to her voice and gives this song a powerful and haunting quality.

Martinmas Time, described by Gavin Greig as ’popular beyond most of its class’, has a formidable pedigree, having been sung by Anne Briggs and Maddy Prior amongst others. Rosemary and Tim hold their own. This is the liveliest of the four songs and the guitar accompaniment contributes significant drive and energy.

Listening to these four songs is just a starter. It whets the appetite for more. Perhaps a main course will follow...

Tracks recorded live at The Blue Door by Firth & Grey