Christine Cooper - These Dreams Like Trees Are Dark & Twisting 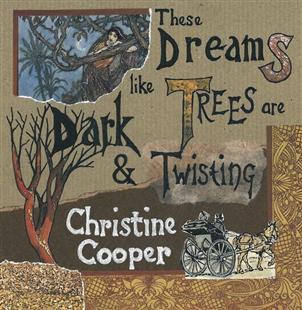 These Dreams Like Trees Are Dark And Twisted offers a set of tracks whose foundations are found in traditional songs but have been re-arranged by Christine Cooper. The stories which she tells are ones we know well, but Cooper’s re-imaginations of these classics are clever, dark and twisted.

The epitome of these tracks is in her rendition of The Cruel Mother. Being used to the Shirley Collins and Steeleye Span versions of this classic traditional tune Cooper’s adaptation was far more dramatically reflective of the brutal story line which it recounts. The pizzicato and rising strings combined with the childlike chimes in the background effectively heighten the eerie tension and cast a darker shadow over what ultimately is a ghostly tale of infanticide.

Another re-interpretation of an old classic is Cooper’s The Lovers’ Tasks. It is infinitely superior to the Simon and Garfunkel rendition of the same story in Scarborough Fair, as the simple score makes it more refreshing and delicate, reminiscent of summer sunsets and lemonade - the highlight of the album.

Y fwynlan o serch is the nearest Cooper gets to a sedately cheerful track on this release. Her delicate voice sounds even more elegant when she sings in Welsh. Not being able to understand Welsh allows your imagination to wander and impart your own interpretation of what the message is - at a guess I would suggest it’s about love. In a similar musical manner The Ploughboy tells us a love story which is pushed off course by parental intervention - Cooper’s soulful voice and simple arrangement on both these tracks create a serene and soothing mood.

The final track One Penny was a little disappointing, which meant that the EP ended with a whimper instead of a bang. There is nothing wrong with it - layered vocals, banjos and lyrics about the open road are always enjoyable - but it lacks some of the magic which the other tracks are soaked in.

There are no foot-tappers on this release. These tracks are spookily atmospheric and their musical simplicity induces tranquillity. Cooper tells her stories confidently with a beautiful voice, and her Welsh left me enchanted.