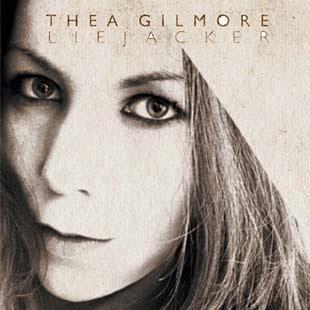 Continuing the Bright Young Blog catch-up with albums from 2008, I feel I have to throw in the latest offering from Thea Gilmore. Is Thea folk? Well, maybe not in a Bellowhead or a Fairport sense - even if she did do work experience at Fairport’s Woodworm Studios. However, her self-penned work has a folk rock feel, and perhaps never more so than on this, her eighth album.

To be honest, I almost didn’t bother with Liejacker. I’ve been a bit of a fan of Thea since 2000’s Lipstick Conspiracies, an album which along with her debut ’Burning Dorothy’, seemed to indicate a bright new talent, with huge potential. However, things had seemed to drift with subsequent releases getting less and less interesting. They all had songs which were individual moments of genius, but getting fewer per album. Even if 2006’s Harpo’s Ghost did become only Thea’s second album to chart, it was her first album where I really couldn’t point to a single stand-out track that grabbed me. Thea’s prolific output - then seven albums in nine years - seemed to be coming increasingly at a cost of quality. So when I heard Liejacker was coming out last May, I largely just shrugged.

However, snippets heard here and there, and the single “Old Soul”, were enough to hint at a return to form, and to get me to pick up the CD. My initial reactions were positive, but the album has proven to be one of those slow burners, that gradually creeps under your skin and that you find yourself instinctively coming back to repeatedly. It is slower and darker than previous records, with the lyrics less obtuse than on more recent releases. The music is acoustic and stark, though coloured which touches of ukulele, mandolin, and harmonium. Thea’s singing is better than it’s ever been. All in all, it feels more considered. Thea herself has apparently described it as the ’lovechild of whisky and heartache’. It certainly feels more personal, and the result is an album which I think is easily Thea’s best, and which, for me, is one of surprise gems of 2008.

At 13 songs, the album isn’t short, but it’s difficult to pick out obvious weaker, filler tracks. Perhaps “The Wrong Side” and “Slow Journey” unnecessarily pad out the middle of the album, but even these showcase Thea’s voice beautifully. Even the bonus track, a stripped back cover of Dead Or Alive’s “You Spin Me Right Round”, is great fun if completely frivolous.

However, stand out tracks include: “Old Soul”, the yearning opening track (a duet with Dave McCabe of the Zutons); the melancholy of “Icarus Wind”, a song for those ’just held together with hope and candlewax’; the brooding threat and religious imagery in the addiction song “And You Shall Know No Other God But Me”; or for sheer sing-along fun, “When I Get Back To Shore”. And then there’s the closer of the album proper, the hauntingly beautiful "The Lower Road" - the album’s second duet, this time featuring Joan Baez.

The background to the album clearly hasn’t been pleasant, with Thea fighting her way through depression. However, from it she has forged a collection of songs which finally justifies the praise that the likes of Uncut have been throwing at her for years, and which realises the potential she’s shown for so long. Actually, I say ’finally’, but it is worth remembering that, while this may be her eighth album, she is still yet to turn 30. On this basis, hopefully she’ll be around, producing music, for sometime yet.