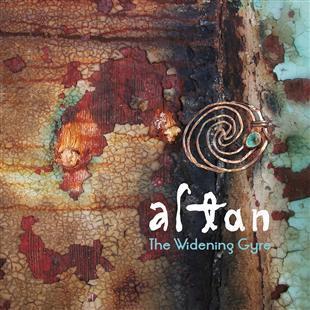 Being asked to review an Altan record is akin to being asked to write the next chapter of a classic novel. This particular story has been written over the course of nearly 35 years and The Widening Gyre is the 12th chapter of an already remarkable tale that has seen Altan keep the flame of Irish music burning fiercely all over the world.

Recorded in Nashville with Compass records head honcho Garry West at the production desk, Altan have looked to flex their muscles on this new record. Renowned predominantly for the strand of traditional Irish music known as Donegal Fiddling, the band have looked to the traditions of American music and in particular that of the Appalachian bluegrass fiddle to fuse together with their own sound.

Gathering together a whole host of roots musician friends the record sees the likes of Tim O’Brien, Eddi Reader and Michael McGoldrick joining in on a compelling development in the Altan story.

Most remarkable of the guest appearances is that of long-time friend Mary Chapin Carpenter who lends her earthy vocal to a startling rendition of WB Yeats’ poem of a bird at sea. A more perfect metaphor for this transatlantic project it’s impossible to imagine.

It’s almost unfair to talk of high points on a record that has consistent quality throughout but needless to say for anyone who’s a sucker for a good anthem look no further than No Ash Will Burn; a hands-in-the-air waltzer with singer Mairead Ni Mhaonaigh trading vocals with another long-time friend of the band, Bruce Molsky. The dual vocals blend perfectly and lift Walt Aldridge’s mournful tune to greater heights.

Those looking for the jigs and reels for which Altan have become so noted won’t be disappointed either. Buffalo Gals/Leather Britches/Leslie’s Reel will have fans of the band whooping with delight at the rip-roaring bluegrass of Buffalo Gals in particular.

The only question you might ask of The Widening Gyre is will it open Altan up to new audiences and appreciators? The answer is probably not, but with a loyal global fan base already in place it would have been foolish of them to tamper with a formula that’s brought them so much success over 35 years. The exploration of American traditional music and the addition of many talented friends is the only tonic required to add flavour and depth on another exciting adventure for Altan.