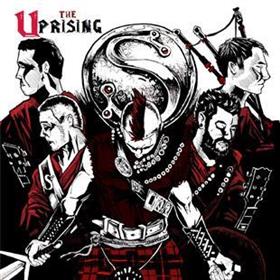 Stramash! A fierce and mighty name for a fierce and mighty Scottish band! Be sure to say the name over and over in your head until it makes you quiver with fear! Well maybe not, but this idea of Scottish power certainly rings true with their Celtic/alternative style of music.

The band is very young with five members who merge modern rock/metal style music with raw Celtic power to give us a very energetic and lively album. Mixing electric guitars, drums and bagpipes is a more unusual instrument mixture but not one that is a gamble as such.

The opening track Hush couldn’t be more different to what the title suggests. This is an excellent rock song with tingling bagpipes and strong electric guitar skills. The song itself is very familiar rock and roll but yet still manages to capture that essential folk twinge that we need. This shows us how the album can split: into rock with a folk element, folk with a rock element and then a balance between the two.

If you prefer not to mix your genres then the next track The Rattlin Bog is going to be much more to your taste as it is a fantastic tune that takes folk to a whole new level. There are still some elements of rock in this track but the emphasis is flipped, so rather than simply a rock track with folk elements like Hush, it becomes a folk track with rock elements.

Other more folkie tracks on the album would be Dark Lochnager and Queen of Scots which are in the storytelling style of Scottish music.

Interestingly, the third track, Bonnie Ship The Diamon’, is then the middle ground with a strong rock background but a much clearer folk element, almost giving the listener a mix of the previous two styles of tunes. This is also seen in The Insanity of Miss McAskill and particularly The Walking Son’.

The instrumentation does not generally extend beyond electric guitars, drums and bagpipes, however, the particular ways in which these are used is very different in each track, each carefully considered for their role in a particular set.

The album does give us a combination of vocal and instrumental tracks, with by far the most interesting of the latter kind being The Jig Rig which sounds like it is telling a story to us even without words. The bagpipe skills displayed during the track show more than simple playing, but stretch into careful thought too, a talent that musicians have to work hard to perfect.

Top Level must be commended for its folk style mega mix of musical and well known numbers which is not expected or predictable!

This is a great album and something everyone should at least take the time to sample.