Folklaw - The Tales That They Tell 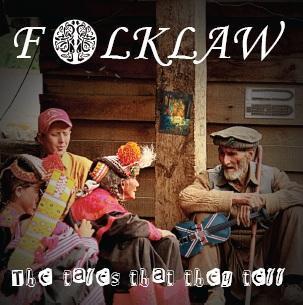 The Tales That They Tell is a release full of original content. The stories of Folklaw’s songs are weighed heavily towards traditional themes; slavery, ships, unemployment, forests, and gypsies - but with a more modern twist than you would find in the traditional tracks.

Folklaw advertise themselves as a group of lads from the South West whose strengths lie in acrobatic fiddling and earthy vocals, and on first listen you will be taken away by the hearty, regional accent, and the boundless fluidity of the fiddle part - it really makes an impression.

It’s rare that you find an album which opens with such a high level of intense sound and energy. The rambunctious opening of Leaves of God is fitted up with bodhran drum, a happy addition to almost any situation, and a syncopated tambourine beat which bounces wonderfully off the fiddle and guitar. The opening is a celebration of heritage and the historical romance of the forest and an infectiously cheery tune.

The Tales That They Tell is a continuation of the paced fiddle and guitar tune of the previous track. Lyrically it is a reflection of the superficiality of employment and judgement of people’s worth. The references to the dole queue is a gentle reminder of the poverty in today’s world.

The pace slows down in the next track, Seeds Of Freedom, and it’s nice to know that the earthy tones which marked the previous two tracks work just as well when the pace slows and the volume subsides. Gypsy Rain however is the standout of the slower tracks, thematically gypsies always fill me with the excitement of their mystery and freedom -and the inevitable ending of loss. This sentiment is captured wonderfully in this track, as the girl ’stays free, free as the sky lark to fly high between the clouds over country lanes.’

Dublin City hears a different voice and a pick up in the pace with brilliantly infectious fiddling. It is the only traditional track on the release, and is absolutely great. A prominent return of the bodhran is totally welcome. Once again the energy is phenomenal and is likely to get the most sober of feet tapping.

The fiddling often reflects balkan beats, and the overall sound is fairly rootsy. However this album is at its best when they stick with traditional themes and sounds. The Bodrhan and fiddle are fabulous, and Dublin City, and Gypsy Rain are the standout tracks, and that is partly because of the folk mysticism which lies in their subject matter, and the appeal which the Irish and Gypsies have in the imagination. These tracks have a touch of magic about them, and in the face of reality concerning unemployment and homelessness - themes both touched on in the album - this magic is truly welcome.

The Tales That They Tell is packed full of energy and virtuosic playing. The band exhibit a wonderful mastery over their instruments, and material. On occasion the vocalist’s husky tones sounded a little painful, though this in no way detracts from overall enjoyment.