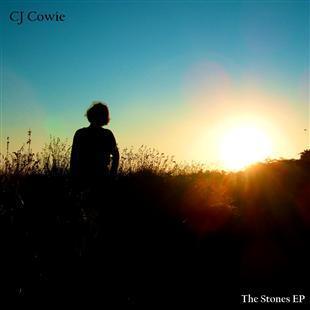 Recently launched label Cotton Hill Records’ first release is also the debut from Scottish songwriter CJ Cowie, who recorded The Stones EP immediately before leaving the UK for the sunnier climes of Zambia.

As might be expected, the five featured songs are more reflective of life in the UK than central Africa. After emerging from the shadows of Parbold Hill, Cowie embarks on a journey of loss, depression and discovery. As he blinks into car headlights, sparse guitar and fiddle evoke the unwelcoming atmosphere of the dark, lonely path that he is to embark upon.

Scots folklore and literature lend a hand to the title track’s metaphoric handling of newly exorcised demons. It’s no surprise that the Stones is a live favourite, with its memorable, almost sing along refrain of ’I don’t carry the stones/I don’t carry those now’.

Following a rain-drenched, brass-laden return home in Past All Visible Dogs, the catchy September Waltz is considerably upbeat and finds the narrator whistling happily at the prospect of taking a new partner dancing.

The EP closes with Cowie’s harmonium-backed setting of A Boat beneath a Sunny Sky, Lewis Carroll’s acrostic tribute to Alice Liddell. Here, the poem has a new poignancy,
reflecting on the singer’s loss as he ponders the future.

Vocally hinting towards Tim Buckley and King Creosote and adding jazz influences from his childhood, CJ Cowie has produced a rounded, satisfying introduction.