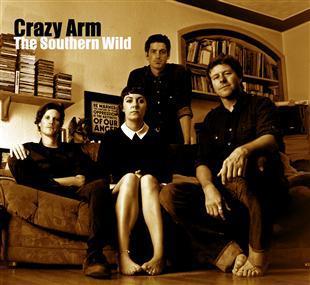 The popularity of the acoustic elements of Crazy Arm’s performances over the last two years have encouraged them to create a primarily acoustic album.

The sound of The Southern Wild clearly establishes itself in its country, folk and bluegrass roots; a stark new level compared to the guitar-based, heavy country rock and moderately anarchistic style of the band’s two previous albums.

This refreshing change marks the notable development and diversifying of the band’s style and influences. The re-arrangement of the band’s members further cements this new and exciting path that this album sets the trail for.

The tribute to the ’true heroes’ of the past, Remembrance, is carried by melodic and head-nodding harmonies by Butterfield and Johns. Quick, uplifting and catchy, it is clear why this track was selected as the outstanding single for the album.

The song County Jaws has a particularly modern and poppy flavour to it and stands as one of the least acoustic tracks on the album. The keyboards and electric guitars feature strongly on this song.

Similarly, the low and steady lull of the keyboard in In Black Canyon is a prominent feature that wraps up the acoustic elements to give a slightly more polished and neat effect with pop elements.

The Wildcats Of Denbury is an instrumental track with low bass and melodic acoustic guitar work. This track further diversifies the album and demonstrates that the band members’ instrumental song-writing skills shine alone even without vocals.

Slightly slower and more melancholic than the other tracks featured on the album is Fossils; this wistful song particularly showcases Butterfield’s emotive voice.

The particularly folky yet soaring songs A Pocketful Of Gold and We Don’t Go There Any More soften and emphasise the roots of the overall style of the album. Additionally, the quick-paced Don’t Be Cruel features well-balanced, modern elements blended with a nostalgic and comforting twang, enhanced by the banjo.

Similarly, Roasting River is an instantly punchy song featuring Johns’ rough and rocky vocals. The influence of the acoustic guitar and subtle rhythm of the banjo give this otherwise emphatic song a folky tone.

Oh Death/Hell To Pay features Butterfield’s gravelly, rocky vocals that lift this song up and give it an auditory kick. Beginning with her outspoken a cappella rendition of Oh Death, the song moves seamlessly into Hell To Pay with support from the acoustic guitar and harmonised by Johns’ strong voice.

Another a cappella song The Valley Of Weeping features John’s crying voice with just a simple bassline for accompaniment, which demonstrates the raw emotion of his vocals.

This album is no less layered or ’full’ with these acoustic arrangements than the band’s heavier previous albums. Outspoken, unapologetic and raw, this album is punchy and is evidently here to make a point. This album is likely to appeal most to young folk and country enthusiasts, particularly due to the political and contemporary content of the lyrics and catchy melodies with pop influences.

Lyrically poignant, insightful and to the point, this album may not intend to give the most polished finished product but instead offers a variety of heartfelt and thoroughly listenable songs.