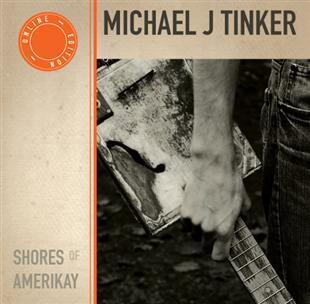 Shores of Amerikay is a selection of traditional songs that have been reshaped by Michael J Tinker’s own tunes and creations. There is a lot to enjoy - a soulful voice (at times), simple guitar riffs, and the use of a washboard, which inevitably brightens almost any day - but there were times when the sound was slightly lacking in sincerity.

This lack of sincerity is probably a lot to do with taste. With a title such as The Shores of Amerikay one should have been expecting a pseudo-American sound. The set-up of the accompaniment and instrumentation used on some tracks is wholly reminiscent of Bo Diddley - this works well on Get Along Home Cindy. This is a really enjoyable track, but for a traditional English folk fan the rhythm and bluesy sound isn’t necessarily to taste.

In his rendition of Bonny Boy - also known as The Trees They do Grow High - Tinker has written his own melody. His tune is beautiful, but I have been in love with Joan Baez’s version of this classic for several years, and despite his new delicate composition his vocals don’t stir the deep emotions she evokes.

Other traditional tunes on the record include The Snowstorm: it’s always cheery to listen to songs about the death of a mother and son. House Carpenter is the best of the traditional tracks on the album by being one of the great folk failed love stories. Annabel Lee, though not a traditional folk song, is a brilliant poem by the stalwart of gothic fiction, Edgar Allen Poe. Tinker’s Annabel Lee is a spectacularly enjoyable track; it’s slow and tranquil yet the additional vocals elevate the poem from the darkness with which it is usually associated.

The subject matter in Tinker’s own creations are fairly sentimental. Hold You Light is about letting go of your children and features a spectacularly beautiful arco bass solo. Breathe is another creation, featuring delicate piano and whispering vocals, which put me on edge a bit as the extended notes didn’t quite work.

Belfast is also self-penned, and witnesses a return to the bluesy feel showcased earlier in the album. It is simple and jazzy and pretty good, while Hammer could be a story straight out of a Johnny Cash album.

The most politicised song on this album is First Do No Harm. On first listen, the message isn’t glaringly obvious, but with further research it becomes clear it is about abortion. This is a pretty heavy message for a folk album, but it’s one Tinker felt necessary to get out there. It’s definitely the album’s low point - despite the elegant guitar part.

The content of the majority of the songs is pretty black, the exceptions being Get Along Home Cindy and Belfast. The characters in the rest of the tracks end up dead and, if they’re lucky, just heartbroken. There are very beautiful moments, but sometimes the message is a bit grim, and at times the vocals seem a little strained.