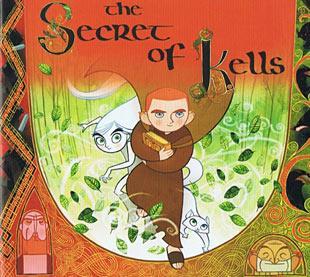 As the composer of musical scores to other great animations such a Coraline and Microcosmos, when Bruno Coulais was asked to write the score for the first full length animation to come out of Ireland, a collaboration with Irish folk/world fusion band Kila seemed inevitable.

The Secret of Kells is the story of young monk Brendan, whose life is changed forever when he is initiated into the secrets of the Book of Kells and embarks on an extraordinary adventure, meeting fearsome monsters, Vikings, and a serpent god along the way.

Coulais and Kila have created a soundtrack that perfectly complements and frames the beautiful animation, and leads the listener into Brendan’s magical world, where he meets the fairy Aisling and battles with fearsome Viking raiders.

With most of the tracks being instrumental (Aisling Song being an interesting exception) it means that the album can easily be listened to in isolation from the film.

Although most of the tracks were written by Coulais (Kila only co-wrote two of them), the final two tracks on the album have been taken from older Kila albums, giving new listeners the ideal opportunity to hear them in their normal surroundings.