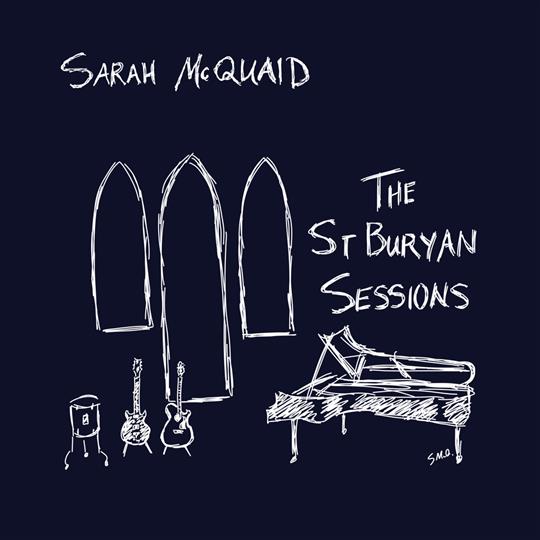 It was crowdfunding that enabled The St Buryan Sessions to be created when the proposed live tour recording was stymied by the pandemic. The selection of songs reworked here, ranging from 1997 right up to date, will make the uninitiated wish they’d found Sarah McQuaid sooner.

The minimal, monochrome sleeve notes provide insights from the producer-engineer Martin Stansbury and Sarah McQuaid about the evolution of the project and the visual design reflects the solitary nature of the work. The succinct song descriptions (with McQuaid’s micro-doodles) have a two-fold advantage; they do not patronise long-time listeners and yet they are approachable for newcomers and invite a deeper dive into the artist’s 25 year repertoire.

The acapella opener, Sweetness and Pain instantly conveys the lofty acoustics of the medieval church where the album was recorded through the raw power of the vocal. The imagery of brambles, wolves, winter and dread pervade the first few songs and McQuaid does not shy away from weaving major themes such as death, volcanoes and celestial bodies in amongst quotidian observations of garden wildlife and anecdotes from her children’s lives.

The mellow piano, guitars and tom-drum are played with devastating aplomb in a space that just would not forgive a bum note, but it is Sarah McQuaid’s voice that always dominates at the front of the mix. Witness the quivering feedback from the Ibanez guitar throughout The Tug of the Moon and enjoy the 10 seconds given to hear it fully melt away.

The vocal loops on In Derby Cathedral and If We Dig Any Deeper add choral layers and welcome contrast. The bilingual cover of the jazz standard Autumn Leaves is delivered with full emotional power.

There is a synchronicity in the fact that this album was recorded in St Buryan’s; reputedly a hermitage founded by a 6th century Irish princess that came to settle in Cornwall. It has provided an inspirational backdrop for an American musician that had herself come to Cornwall fourteen years before to settle, forced into hermitic performance by extraordinary world circumstances.

The new treatments of beloved songs will no doubt charm Sarah McQuaid’s established fan base. Moreover, the album itself provides an enigmatic souvenir of the pandemic era.

Its contrapuntal messages of fear and hope seem to step out from individual songs and assume deeper meaning in the current time. A finely curated album.

Released on CD, vinyl and digitally October 15 2021. Produced and recorded by Martin Stansbury.