Annalivia - The Same Way Down 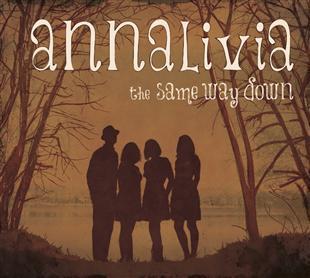 The Same Way Down is Annalivia’s second album. What strikes as unusual about this band is that they originate from and remain based in America, although their music is strongly centred by traditional British folk instruments and sounds. Even the vocalists’ accents are reminiscent of a lyrical Irish lilt or Scottish tones.

With artfully sculpted melodies, enchanting harmonies and rhythmic strings, these talented musicians have proven their ability to tastefully and beautifully create an album that gives a contemporary sound whilst holding firmly onto its roots.

The album begins with False Sir John, a lively, merry melody with a traditional sound, the highlight of which is vocalist Liz Simmons’ warm and sweet voice. New Mown Meadow plays a clever instrumental intertwinement of the traditional violin with the American banjo. This bright and head-nodding track incorporates a collected of reels; So Long Old Friend, The Fine Apron and New Mown Meadow.

Similarly the instrumental tune Up in Smoke is led by strong, melodic fiddle harmonies by Rae and Vandersteel. It comes to mind that the quick instrumental tunes with the steadier, more lamenting vocal songs would be a very fitting combination for a live set.

To contrast these songs, the album introduces lamenting, melodic songs such as Up in Smoke and Wherever We’re Bound. These songs are particularly reminiscent of the band’s American roots and show off Simmons’ lyrical voice, supported by harmonies by Rae and Vandersteel.

Unlike any of the other songs on the album, Turtle Dove features Simmons’s voice harmonised beautifully with that of Cohen’s strong bass voice. With the moody and atmospheric tones of the traditional song, this stands as one of the highlights of the whole album.

The Same Way Down features a solid balance of instrumental with vocal-led songs. It is a bit of a shame that there are only nine tracks on this album. From this promising start, Annalivia’s next album will be very gladly-awaited.

The range of influences incorporated in this album gives it a wide appeal and is sure to invite many a raving review. Listeners of Joni Mitchell and The Dixie Chicks as well as traditional folkies would be wise to give this album a listen.