The Chair - The Road To Hammer Junkie 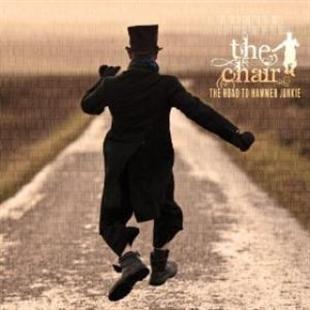 The Road To Hammer Junkie is The Chair’s second album. They’ve spent the last few years building up an astounding reputation as a live band, renowned for their energy - and from listening to this release it is difficult to imagine any of their creations being played without immense style and enthusiasm.

The album is composed mostly of instrumental tunes with a couple of songs thrown in the mix. There isn’t nearly enough purely instrumental folk around these days and The Chair should be taken as a lesson of how to absolutely do it right. The way in which they layer their sound, as it builds and grows is an absolute pleasure to listen to. The twin fiddling is phenomenal - if sometimes a bit shrill for a bass enthusiast - and there is plenty of banjo plucking away reassuringly. Not only is their sound very impressive, but the musicality with which they put together, create, and mix their tunes is a storming success.

The opening number, The Road to Hammer Junkie is a wonderful introduction to their sound - with a really deep timbre, it conjures up some quintessentially Scottish images. It’s a rip-roaring opening to an album packed with sounds, and influences.

Hup Set follows and starts as a gently rocking tune and grows into a far more fast paced number which really gets your feet tapping before morphing into something a bit more, dare I say it, funky - when a background shuffle beat kicks in.

Armenian is an incredibly well stylised track as layers of sound build into a frenzied Fiddler on the Roof-styled blaze, whilst the more frivolous soaring fiddle melodies of Furmiston Ruby delight and would bring a smile to most - probably a highlight of the release. Semantically The Dark Maid is disappointing - a delicate and lighter tune than would have been hoped - but had it been called The Fair Maid it would be great.

The Chair take a more bluesy turn with Knees Of Fire - one of the few tracks which includes vocals. The transition between more acoustic folk and blues isn’t exactly seamless, perhaps they may have been better off as separate numbers. Each section is really well executed, but they don’t mesh perfectly.

However The Hamars O’Syradale, another of their vocal numbers, is one of the best tracks. It tells a wonderful story both musically and lyrically, with just enough regional emphasis and a sorrowful and barely-there female harmony.

The album closes with The Big Set, a number which opens with a slight skiffle beat and grows into a pretty intricate banjo part playing a traditional sounding melody, and to top it off an impressive rise and fall in the string part - this is an example of the band’s use of juxtaposition working really well. And the threads come together for a stomping final showstopper.

The Chair have a really Celtic sound, and many of their numbers wouldn’t sound out of place in a visit Scotland advert. The enthusiasm and sound is relentless, and at times the pace is so fast you can’t always believe they will be able to keep up with themselves. The Road to Hammer Junkie is as close as you can get to a guaranteed foot-tappin’ album.