The Brothers Gillespie - The Merciful Road 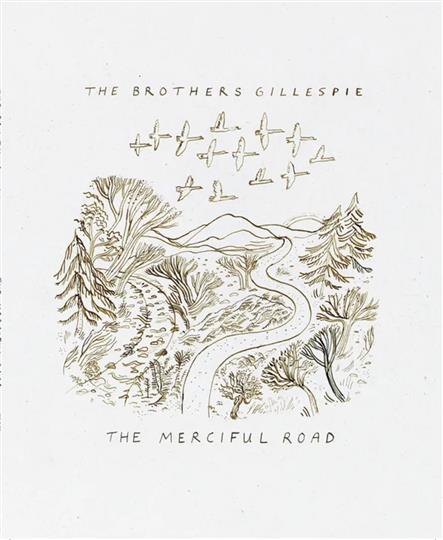 Comprising North Tyne troubadours James and Sam Gillespie, the sibling duo recorded their third album The Merciful Road in their late grandmother’s cottage on the banks of the River Tweed. The songs, as they put it, were “born of an awareness of the myriad graces and resilient blessings in a world that is nonetheless unravelling”.

All bar one are self-penned, but steeped in the traditional folk sounds of their influences, the soft burr of their voices entwining in gorgeous harmonies as, joined by Jen Hill on double bass, they open with Pilgrim Road, a vaguely Appalachian sounding song of travellers, the lure of the road and the kindness of strangers.

Mingling religions and a celebration of nature, the gently tumbling melody of Wingrove Road with its beguiling refrain is suffused with childlike wonder. Remaining with the imagery of the natural world for Bird On The Bough, a dreamy Celtic-infused blues featuring Siannie Moodie on clarsach is about feeling lost in the dark and desperation and looking for signs of hope.

Two seconds shy of seven minutes, featuring Mairead Kerr on piano with Sam on fretless gourd banjo, Great Aunt Katherine is a tribute to the courage of the emigrants who migrated from Lochinver in the Highlands to Goose Cove in Canada to start a farm and raise a family and their grandmother’s stories of others from the Hebrides who sailed to Whangārei in New Zealand. The Katherine of the title finds her ancestors’ grave hidden in the woods, the song celebrating the link between generations.

The vocals augmented by Tim Lane, the shifting tempo and melody of the flute-shaded Descended strikes a similar note about belonging to the land. This poetic love song to the North Country, in particular Northumbria’s Wannie Hills and Cold Law west of Kirkwhelpington, closes with a plea to protect the green spaces accompanied by the shimmering metal discs of James’ tamburello.

The bucolic, fingerpicked Albion continues the environmental thrust as, with playing evocative of Bert Jansch, it speaks of poisoned waters and blood and a call for a new generation to raise their voices and restore the famished field and an Albion reborn. It’s followed, sung unaccompanied save for shimmering clarsach, by the traditional unadorned hymn of When Fortune Turns The Wheel, a Scottish drinking song the duo originally recorded for the Hadrian’s Wall video as part of the Songs of England series commissioned by English Heritage and the Nest Collective.

The album ends with another traveller’s tune, the delicately fingerpicked folk blues The Endless Road with its lines about sharing songs and fighting for freedom underscored by the call of home.

Uncluttered, simply but intoxicatingly arranged and adorned by their magical harmonies, musically steeped in the earth, grass and leaves that mark the pathways, this is a road you really need to travel.

Self-released on CD, vinyl and digitally March 15 2022. Produced by Sam and James Gillespie with Tim Lane.