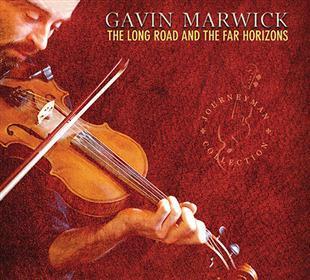 Many musicians have particular dreams relating to their careers and for Gavin Marwick The Long Road and the Far Horizons accomplishes one of his. The product of his ambitions are a self penned double album and tune book, where he brings together 13 talented artists to assist in making his dream a striking reality.

The collection hits on the head of something that not all composers can get right, and that’s diversity. Some composers and musicians can try too hard at making a signature sound that then just makes every tune repetitive. This is definitely not however the case here.

Whether it is the fast foot tapping of The Breadalbane Reel/Queen Maeve/The Perthshire Races or the Celtic bliss of Balkan Red, you know that you are getting a double album of diverse, exciting music.

One of the biggest attractions of this double album is the energy that you experience. You can see and feel the time taken with the album and the energy put into it. The old saying goes that you only get out what you put in and this certainly shows here as the amount of energy and excitement that flows out during tracks like The Minotaur/Scented Grove would not be possible without dedication and hard work.

The variety is even nicely split between the two albums themselves, we get many dancey tunes in The Long Road and some slightly slower, gentle tunes in the second album The Far Horizons. A good example would be The Granton Back Step/The Second Granton Back Step which slowly plucks away at you.

It is not only Gavin who should be commended for his work on these albums but also the ensemble of artists he gathered to aid him, as their talents also make this music as successful and powerful as it is. Davidson the Luthier 1, The Concert Hall and October are to name but a few that would not resonate quite as well as solo tunes.

A very careful balanced was reached in these albums. There has not been too much emphasis on any one style or instrument, which has helped to maintain the appeal of the albums and make it so the only option is to enjoy every aspect.

It is difficult in many ways to believe that these albums are from the same artist, you would be forgiven for thinking that they are Scottish collections that take contributions from many different sources, that is how varied Gavin’s composing is.