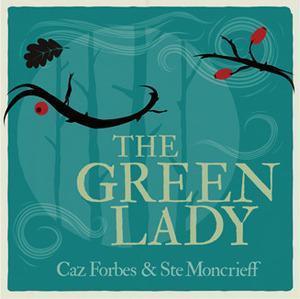 Ste Moncrieff and Caz Forbes have previously toured as The Raven but have now released The Green Lady under their own names. The music is sparse and effective, reworking traditional songs ranging from the well-known (Lowlands) to the obscure (Riding Down to Portsmouth). I’ts unpretentious and attractive fare, perhaps a little slow-paced in places but deeply authentic and engaging for the listener.

The Green Lady is mainly comprised of traditional songs with one instrumental, written by Moncrieff, Orkney Tune providing contrast.

A lively opening is provided in The Whitby Maid, showcasing Forbes’ vocals in particular. The voices of the artists complement well, with Ste Moncrieff mainly providing supporting vocals although taking the lead in Adieu Sweet Nancy and The Leaving of Liverpool, on the latter song working particularly well in harmony with Forbes.

Quieter moments come in the form of the tragic songs Lowlands and Geordie, both told in compelling fashion here. A spirited and joyful Maggie May and heartfelt The Leaving of Liverpool provide the emotional heart of the album. Lullaby The Little Fish is a beautiful and gentle way to close the album.

The great strength of The Green Lady is the careful selection of strong stories from the folk tradition, told without ostentation but with wit and character.

1. The Whitby Maid
2. Lowlands Away
3. Geordie
4. Orkney Tune
5. The Leaving of Liverpool
6. The Green Lady
7. Adieu Sweet Lovely Nancy
8. Young Edwin in the Lowlands
9. Riding Down to Portsmouth
10. All Things are Quite Silent
11. Two Corbies
12. Maggie May
13. The Little Fish