Foxpockets - The Coracle & The Albatross 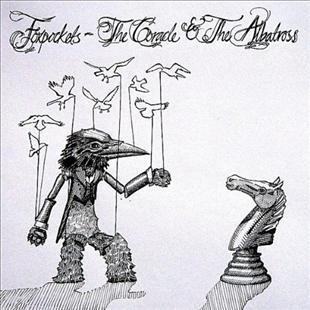 Since forming in 2010 Foxpockets have been honing their modern-day fables, played on an unusual combination of instruments including harp, accordion, banjo and penny whistle. The result is a distinctive, enchanting sound that weaves itself around the listener like a spell.

Grendel takes its name from one of the fearsome monsters of Beowulf, but the song laces its menace with just a bit of whimsy, which strikes a very enjoyable tone. The choice of instrumentation adds a touch of the medieval to proceedings, and the refrain "he might rip off your head" is sung as both a warning, and with a jaded air of inevitability.

Wintersleep alternates between being upbeat, with spoons accompaniment, and a more down-tempo tune with harp almost masquerading as a music box. Meanwhile Twelve Sisters creates a sound reminiscent of a carousel.

The quality of vocals is not superb on The Coracle & The Albatross, but they seem in keeping with the general charm, whimsy and slight dread that pervades the EP.

Foxpockets are a unique new sound to the British folk scene, mixing unusual combinations of instrumentation and sounds to create songs that suggest they have emerged from the pages of fairytales. It is well worth spending some time with them down the rabbit hole.

Released in February 2011 on the Reverb Worship label.