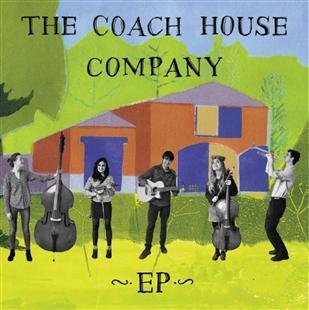 So what’s university for other than getting yourself involved in a band (aside from the more pressing issues of getting yourself an education)? That’s exactly what the quintet who make up The Coach House Company did a few years back, working up a live repertoire, a live reputation and now issuing their first recorded efforts in a five track EP.

Influences come thick and fast from the traditional folk core of jigs, reels, song and beyond into jazz and classical, while the vocal harmonies add a most impressive aspect to this collection.

Combining traditional and instantly recognisable standards and their own compositions, they have obviously taken care to put together a collection which represents the variety of instruments, voices and arrangements which have inspired the band.

What makes the collection of songs and tunes a little different is the presence of Colin Danskin’s trumpet - at times you may be reminded of a certain television commercial ad for a certain brown bread, while during the galloping Flowers Of Redhill he’s blasting away like a fox hunt leading the charge alongside the baying hounds.

With Marianne Schofield’s From The New Country seguing into Star Of The County Down, there’s an obvious Irish impact with Colin Danskin’s family connections coming into play, yet there’s also the French conservatoire influence of Héloise Werner which creeps into Patrick Milne’s All About Eve - all smoky atmospheres and Gallic ambience. All in all the band and their sound make for quite a cosmopolitan collection.

Closing out with the gentle Wild Mountain Thyme, it might just be that it’s the time of year, but this has a warm rich Christmassy seasonal feel to it. Having said that, on several re-listens, the same might even apply to Down By The Sally Gardens - perhaps songs they’ll be busking around in some wintery locations closer to the time. It encompasses another side of the band and shows that there’s more to the group than just brass driven folk tunes.

There are times when you hear a record and recognise that the musicians involved are revelling in the experience just as much as their audience. Listening to The Coach House Company EP is one of those.

1. From The New Country / Star Of The County Down
2. Down By The Sally Gardens
3. All About Eve
4. Green Groves Of Erin / Flowers Of Redhill
5. Wild Mountain Thyme