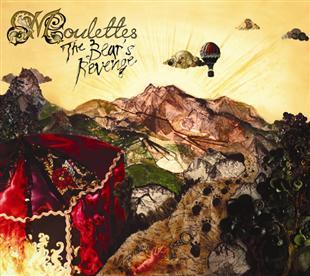 Colourfully, eccentrically dressed, laden with a chorus of sweet voices and a wealth of instruments and ideas, Moulettes are an immensely appealing band. And their new album, The Bear’s Revenge, delivers on that appeal.

Opener Sing Unto Me sets out the band’s stall. Pulsing guitar and bouncy drums herald a joyous, energy-filled and inventive celebration of singing. Playful harmonies tell of a “symphony of colour and sound”.

Country Joy is, as you’d expect from its title, a pleasurable pastoral romp, filled with smart vocal interplay and down-home fiddling. It blends into Uca’s Dance, the introduction of which appears initially to ape the Black Eyed Peas’ I Gotta Feeling. Fortunately, it veers off into an inventive, strings-led thriller, featuring more clattering percussion and Florence + The Machine-esque vocals.

The band are proud of former member Ted Dwane’s success with Mumford & Sons, and the family resemblance is noticeable (indeed, Dwane returns to guest on the album). But Moulettes are a more layered, interesting proposition altogether.

Folkies will enjoy the quick-slow Grumpelstiltskin’s Jig, which has a hint of William Byrd’s La Volta about it, while there’s a strong gypsy jazz influence on the urgent-sounding, instrumental title track. Elsewhere, Half-remembered Song is slinky and beautifully sung, while Circle Song and the terrifically exciting Unlock the Doors turn up the funk, like a vintage fashion-festooned Bellowhead.

There’s a slight lull for the sweet, quiet Songbird, which is lit by a beautiful violin solo and the relatively unadventurous Muse Has Wings, but the standout tracks on the album are its two epics: The quiet, inviting Some Who You Love clocks in at more than seven minutes, but thanks to its stately pace and enchanting flute accompaniment, the time flies by. And Blood & Thunder, which features Liz Green, is a bold, time-signature-shifting, earth-moving finale, featuring some excellent banjo work.

With the one caveat - lyrically, the songs aren’t particularly engaging - The Bear’s Revenge is a superb album: fresh, inventive and exciting. Moulettes would liven up anyone’s record collection.