3 Daft Monkeys - The Antiquated & The Arcane 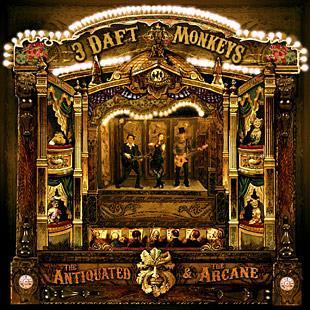 Back in the summer, the 3 Daft Monkeys, a.k.a. Tim, Athene and Jamie, retired to the ’monkey boat’, moored halfway between Penryn and Falmouth in the Fal Estuary, to write material for a new album.

Unmistakably a 3 Daft Monkey production, ’The Antiquated and the Arcane’ is demonstrably less political than their previous album Social Vertigo. Instead the trio take us on a journey through their native Cornwall, sharing stories of unusual or strange occurrences in their quirky musical style. Unfortunately, while this has been alluded to in interviews and reviews, the cover notes do not give any background to the stories behind the new compositions.

The title track is named in homage to the ’Antiquated and Arcane Society’ in Helston, a pagan society where people come to discuss the various myths, legends and energies of Cornwall. Written in Wistam’s Wood in Dartmoor, the lyrics celebrate the magic of the westcountry, but also tell of a lifelong bond between the two protagonists. When put to music the track is ethereal, with Tim’s 12 string guitar conjuring up of a magician preparing to dazzle an audience with a display of illusion, while Athene’s lyrics float above the distorted cymbals as if not quite of this world.

’Days of the Dance’ tells of a Dancing plague in Strasbourg in 1518 when a woman called Frau Troffea began to dance in the street and noone was able to stop her. Always the showman (or woman) the 3 Daft Monkeys have added a theatrical element to the track, with a spoken introduction, which puts Tim in the role of Ringmaster or Master of Ceremonies, calling the listener to roll up and listen to the terrible tale. Popular at gigs, the track descends into the usual monkey-style madness, which makes it almost impossible not to join the dance.

Not all the stories are so ancient, however. An incredibly hard-working live act, ’Casualties of Tour’ alludes to the bizarre happenings, which have taken place while en route to a festival in Skye. One of the catchier songs on an incredibly addictive album, the Monkeys leave us with the sage advice to be ’careful what you wish for’.

The Antiquated and the Arcane brings us ’all the fun in Monkey town’, delivered with their unique musical style - a mixture of international influences, which is still rooted in the classic folk tradition. This is a truly fabulous album and will delight new and old fans alike.