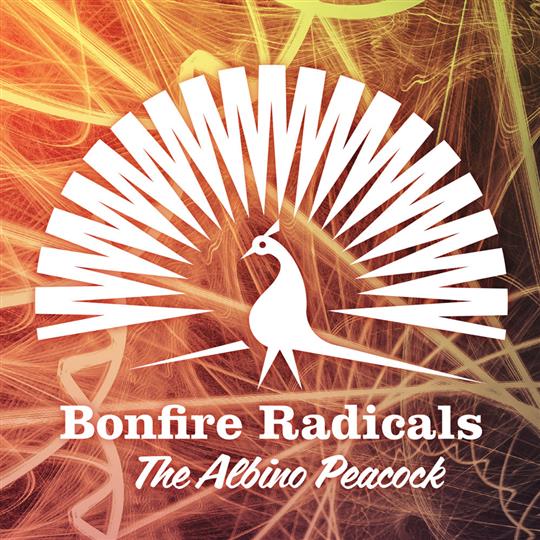 Can you identify a kaval on an album? Know your descant from your treble recorder? The Albino Peacock gives us the chance to answer these questions, exploring new textures while remaining in a familiar melodic tradition.

From the beginning, this album demonstrates that Bonfire Radicals understand just how to slowly reel the listener in. It starts with the eponymous track, which has a riff based around two self-composed hornpipes, gradually building up until the clarinet is jumping with unexpected virtuosity.

When the second track (Coffee Countdown) starts, these familiar surroundings seemingly disappear: the violin is pushed to the background as the wind clearly enjoy showing off their harsher side. The drums in this are particularly exciting, avoiding the tendency to hide behind the complex textures.

Drawing on lyrical conventions such as the yellow headscarf and grave with red roses alongside a ’machiatto’ is a great compromise in this song. They are not attempting to write a song which sounds historic, but acknowledge their traditional influences.

The main thing which you appreciate from this album is the number of talented musicians involved: there are six members of Bonfire Radicals, many of whom contribute more than one instrument. While at points this can be a curse - the beautiful tunes can be drowned out by unnecessary harmonies - it allows for a number of different approaches from the same band.

This progression is handled coherently, though, with the album getting darker as it goes on. In the last track, I Wish, the mournful bass seems a world away from the joyful opening, but there are no jarring contrasts.

As a traditional song recorded by many people over the last few decades, this is an easy way into listening to Bonfire Radicals, and shows their imagination as arrangers. The whispered vocals of the last verse are particularly surprising, but provide a fitting end to an album which has grown in complexity before rediscovering a touching simplicity.

The Albino Peacock manages to be many things: it goes from baffling textures to unaccompanied singing, from a celebration of naivety to a sorrow for what’s gone. While still unpolished, Bonfire Radicals have given us many ideas of where they could go. Whichever they choose, it won’t be the one we expect.

Review
Bonfire Radicals The Space Between 2022