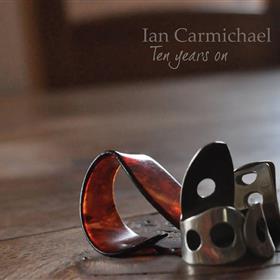 A cursory glance at the titles of the pieces on Ian Carmichael’s new solo recording might give the impression that the listener is in for a collection of pipe and fiddle tunes. While many of the tunes did originate on those instruments, Ian has arranged them for his 5-string banjo to demonstrate that the instrument can sit at ease within traditional music.

He is keen to assuage any pre-emptive fears by emphasising that Ten Years On is not a bluegrass album, and feels that this is the first time that the 5-string’s potential in playing traditional tunes has been shown to work properly, while maintaining the sense of fun that is intrinsic to the instrument.

Recorded and produced in Galway by well-known Irish musician and composer Brendan O’Regan, the album gets underway with a pair of traditional pipe tunes, Eliza Ross’s Reel and Castle Kelly, collected here simply as Eliza. Presented on only Ian’s banjo and Tommy Hayes’ wide stereo percussion, the new piece has an almost hypnotic quality.

The first of Ian’s original compositions, Trampolinees was inspired by children having fun on a trampoline. and the addition of Frankie Lane’s acoustic guitar chords and bassline give it a suitably jaunty, bouncy feel. Brendan O’Regan provides bouzouki on Pipe Set, helping to retain the traditional sound of the Highland pipers’ pieces that form a sandwich around the more contemporary tune Lexy Macaskill.

The first of two tracks based entirely on traditional American fiddle tunes, Colored Aristocracy is a slow, contemplative solo banjo piece and is contrasted nicely by Simon Bradley’s Fiddle Cushion, which is set against another American tune, the Barlow Knife. There is also a pair of fine examples of reels: a couple of segued Irish tunes learned from accordion player Caroline Judge and fiddle player Tommy Peoples and later, Scottish compositions by J Murdoch Henderson and Ian are separated by the traditional Malcolm the Tailor.

Seafaring and military tunes are also represented, with two traditional hornpipes and two pipe marches also being arranged for banjo. The album closes with Ian’s gentle title track, a celebration of his and wife Mary’s tenth wedding anniversary, which sits well with the traditional pieces on the album with its accordion and double bass.

While the traditional pieces on Ten Years On might sound familiar, it is unlikely that they have been heard as they are presented here. Ian Carmichael displays considerable skill on the 5-string banjo, as he demonstrates its versatility on his skilful arrangements of hornpipes, marches, reels and a bit of bluegrass, collected from Scotland, Ireland and America. Ian’s own compositions for the instrument sit seamlessly with the traditional tunes, which are given a new lease of life within the genre.