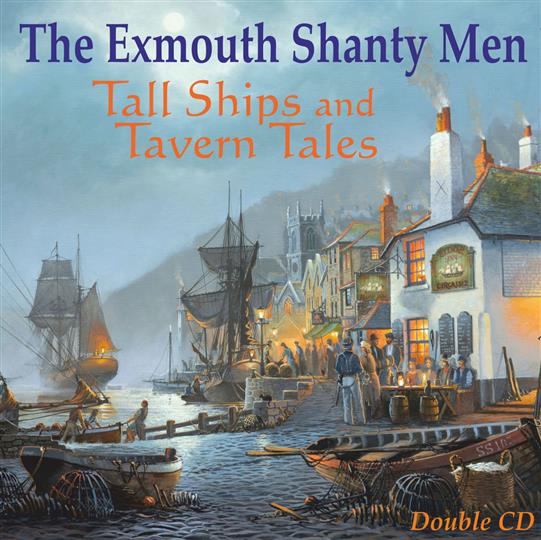 As the name suggests, this lot are a collection of a capella Exmouth shanty singers (though not all men) in the manner of Fishermen’s Friends. Likewise, divided into songs about ships and drinking, this double CD set is a studio representation of their stage show.

Various members take the lead vocals with the others in the choir providing the backing. As such the deep voiced Billy Rollocks gets the deck rolling with the evergreen Leaving Of Liverpool, Eamon Fyre taking over for a lusty rendition of High Barbary, a 16th century account of a sailing ship that encountered and defeated a pirate vessel off the Barbary Coast.

The stage show involves them pulling on a rope to denote that shanties were generally work songs. Little Sally Racket, a brief tops’l halyard song of likely Caribbean origin, has Sam Minella singing the verses with the choir on the haul away refrain.

Of more obscure provenance, though likely derived from a Georgia Sea Islands worksong, Bold Riley is closer to traditional folk with the leaving ballad lament of its massed voices led by Anchorman who also takes lead on Strike The Bell. Elsewhere on the first disc, Eamon Fyre returns for pumps and halyards shanty Mobile Bay, likely from the Gulf of Mexico, Sam Minella on Shiny O collected in 1886 and Billy Rollocks on both the 63-second Lowlands, Lowlands Low from the West Indies and Down Trinidad.

There’s a brace of numbers too from Mal De Mer, the first being the hauling shanty Reuben Ranzo. The name likely a corruption of Lorenzo, it tells how the titular sailor signed aboard a Yankee whaler and, with a little help from the skipper’s daughter (“she give him wine and water/And a bit more than she ought to”) rose to become first mate and “the toughest bastard on the go”.

The second is the more familiar Johnny Come Down To Hilo, the booklet notes remarking it as having an Irish tune and lyrics cannibalised from various minstrel song and shanties, though claims it originated in Massachusetts would explain the vague American Civil War echoes of the melody.

Dai Wright and Curly Quill respectively handle stamp ’n go shanties John Damarey and Heilan Laddie, Levi Shore leads Good Morning Ladies All, Cannon Fodder takes on Billy Boy from the more traditional folk repertoire, and, a second familiar whaling shanty, Rollin Down To Old Maui is fronted by Alfredo Heights. The disc ends with the longest number, Curly upfront for Spanish Ladies, a ballad predating the sea shanty first mentioned in 1796 in the HMS Nellie log book and relating a voyage from Spain to the Downs from the viewpoint of Royal Navy ratings.

Moving from ship to shore, Tavern Tales departs from the strictly traditional canon. It begins with Heaven’s A Bar, written by Dorset singer Tim Haycock and set in a quayside pub with Helen Highwater providing the collection’s sole female voice as the landlady, returning later in proceedings for the broadside ballad Handsome Cabin Boy. Also a ’cover’, Old Fid, led by Eamon Fyre, was penned by Bill Lowndes and inspired by an old Norwegian sailor he’d met, a fid being a tapering pin used to open strands of rope.

A folk singer and RN submariner, Belfast’s Tom Lewis wrote the tune and lyrics to Sailor’s Prayer, recording it on his 1987 album Surfacing, the chorus being traditional, and led here by Billy Rollocks, while former choir member Martin John Nicholls wrote Betty Stogs (sung by Sam Minella) in honour of his paramour, an agent for Skinner’s Brewery.

There’s several familiar tunes in this part of the set, notably Yarmouth Town, learnt from Peter Bellamy, Pay Me My Money Down, Shenandoah, Maggie May, the slave anthem No More Auction Block and, popularised by The Dubliners, the rousing All For Me Grog. A song about a man who sells all his possessions, and even his wife, to pay for drink and tobacco, its origin apparently related to Vice Admiral Sir Edward Vernon, nicknamed Old Grog, who, in 1740, ordered rum rations to be diluted with water to curb drunkenness.

As on the first disc, assorted songs are led by different voices, the line-up including Cannon Fodder (Newfoundland traditional Jack Was Every Inch A Sailor), Mal De Mer (Fireship), Dai Wright (Lord Exmouth celebrating the rear admiral who won the 1816 Battle of Algiers), and Alfredo Heights (Irish capstan shanty Row Bullies Row, ending with another setting by Haycock who wrote the tune for Row On, Row On, the lyrics taken from a whaling logbook, here led by Anchorman.

Probably best served as a souvenir for those who’ve seen the stage show rather than as a polished studio production, but nevertheless, with its mix of the well-known and the obscure, a solid contribution to the shanty shelf in your collection.