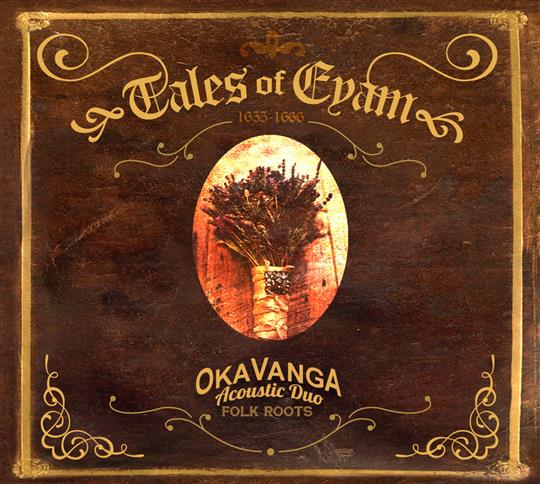 Winners of the 2014 FATEA instrumental album of the year, Oka Vanga, the acoustic/roots duo of Angie Meyer and Will Cox, seem intent on keeping their profile high. Not only that, but Will and Angie throw in a curve ball on their return with Tales Of Eyam, an EP of songs around a concept and also including some vocals.

The five songs all revolve around the Derbyshire village of Eyam, which self imposed a quarantine during an outbreak of bubonic plague in 1665. A subject Angie was keen to explore lyrically following a stop off in the village on a road trip and a subject which as she has pointed out, is both very human as well as being poignant and touching.

An all too brief seventeen minutes (they left three songs off the collection to help with the flow), the five tracks follow two villagers, Emmott Sydell and Rowland Torre, engaged and due to wed, who become the central characters and find themselves the focus of the narrative. Their tragic tale, without wanting to spoil the plot, typifies the whole Eyam legend. Tragedy, unhappiness, sacrifice, courage, it has the lot. Perfect folk fayre.

As you’d expect, there are crystal clear guitars - listen to every note in the simple yet quality production. Song Of The Dell opens with a haunting tune and performance while The Witching Hour provides something more pacey and with a lyric to match keeping at pace with the music.

’Til The End and Beyond This Life are paired as Emmott’s and as Rowland’s songs respectively. Like love songs to each other yet ultimately sad and fated, the fiddle at the start of the former evoking the mood that must have pervaded the village as relationships and faith were tested. Beyond This Life feels unsuitably jaunty considering the subject matter.

The EP finishes naturally with the lovely Out Of The Shadows - what they call an instrumental song of the spirit. Representing the hope and resilience of those who survived, it perhaps confirms that despite the impact of the vocals on the previous four songs, this is what Oka Vanga do best.

The addition of some diversity by incorporating vocals to tell the story begs the question of why they hadn’t explored using vocals in the past. Perhaps the comfort of working again with Ed Cook who had helped record Pilgrim - one of those type of studio wizards who become an extra/non-playing member of the band - has given them the confidence to step into the unknown. But as someone (nearly) once said, one small step for man, a giant leap for Oka Vanga.