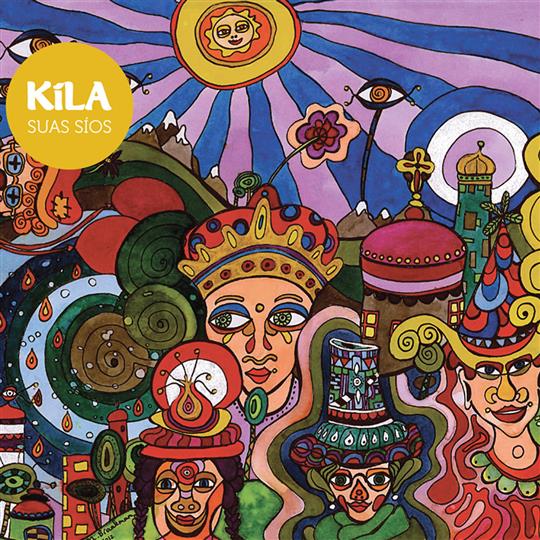 Just occasionally, unexpectedly great music drops in unannounced to ask, “What kept you?” So it is with Kíla and Suas Síos, their tenth studio album release. Hard to believe they’ve been around since 1987; harder still to fathom why they aren’t a much bigger name. Still, with their soundtrack contributions to two much-lauded animated films (Kilkenny-based Cartoon Saloon’s Secrets of Kells and Song Of The Sea), all that may well soon change.

Kíla is a band deeply and firmly rooted in traditional Irish musical styles and instruments, played with deftness, skill and often at breathtaking speed. Preserving traditional music like a museum piece, however, isn’t really their style. Instead, they gleefully adopt a huge range of musical influences, absorbing multiple diverse influences into their sound.

While it’s still recognisably Irish to the core, it’s invigorated by the addition of other instruments, like the saxophones on Mac Lir and electric bass guitar on Suas Síos, for example. Unexpected musical genres also find a place: songwriter Rónán Ó Snodaigh has acknowledged the influence of hip-hop vocal rhythms on his writing style. On paper, that could sound a tad unpromising but, when it’s put together by Kíla, it all makes perfect sense, seems so obvious somehow.

This is fusion of the very best kind, enhancing all the elements that it combines to create something new and exciting. Like chips with curry sauce, it just works.

Suas Síos (or, Up Down), the title track, is impossibly upbeat and catchy. On this, as on Abair, there’s a lively rollicking gallop through the lyrics, always with a keen feel for the rhythm, which never lets up or misses a beat. Without needing to understand the meaning, just the sounds of the words rumbling by are a pleasure in themselves, and it’s easy to see where that hip-hop influence comes in, although it’s never crudely applied. Suddenly realising that Last Mile Home is sung in English feels quite jarring, so different does it sound, although it does also give non-Irish speakers insight into Rónán’s verbal dexterity. He writes lovely poems, too.

Instrumentally, Eoin Dillon’s uilleann pipe playing and original compositions are just as central to the band’s sound as Rónán’s lyrics and bodhrán playing. He demonstrates that tradition is about more than chronological age, with a set of jigs which might easily be modern arrangements of old tunes. A gentle lament for US peace protester Rachel Corrie also fairly chugs along with an angry undercurrent of insistent, ominous strings and percussion.

The superbly titled Mykar Dypnic’s Transient Nights (In Adult Situations) slithers along, mesmerising like a snake-charmer, while Length Of Space has a certain mantra-like quality and Fáinne Ór An Lae makes for a soothing, ambient closing track.