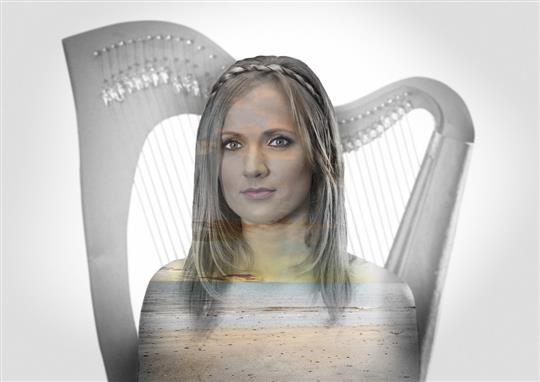 Amy McAllister is an accomplished harpist from County Antrim who has toured internationally to significant acclaim. Her debut album, String on String, is an exciting showcase of her vocal and instrumental talents which are delightful and outstanding.

The album boasts a wide and varied mix of songs and tunes, some traditional and others more contemporary but with strong traditional influences. She has an exciting, fresh and versatile approach to folk music and a debut album which delivers on every level.

There are several new songs written and presented by McAllister on this album. Holy, Holy is a laidback track delivered with soft guitar and harp accompaniment. Clear traditional musical themes flow through the song, successfully blending a more contemporary approach with traditional roots. Mi Amor, is another self-penned song with modern rhythms and phrasing but also very easy on the ear, and again melding old with new in a very appealing way.

Matt Hyland is a traditional song that has been performed by many folk greats. Her stripped back and in some ways understated rendition captures the real emotion and pathos of this traditional lover’s story. McAllister’s vocals are beguiling and she gracefully presents an exceptional interpretation of this lovely song.

Amy McAllister’s harp features throughout the album, however some tracks give the opportunity to more fully appreciate her virtuoso playing, widely acknowledged both at home and abroad.

O’Carolan’s Concerto will have you spellbound as she skillfully performs this accomplished piece, written back in the 18th Century by Ireland’s finest harpist. Jigs will also have you marveling at her skills in interpreting and delivering traditional tunes at a breathless pace.

In Bonnie Blue Eyed Nancy, McAllister takes another traditional song and brings to it a dusky contemporary vibe, with sultry vocals and classy cocktail piano accompaniment. This works so well and is a really interesting approach to interpreting and renewing tradition

Amy McAllister’s vocals and instrumental skills are absolutely beguiling. From a distinctive traditional vocal sound, through to a sultry, semi blues/folk delivery she demonstrates deftness and versatility in ensuring arrangement, setting and accompaniment capture and augment the emotions and overtones of each track.

In String on String she has delivered an album which takes an exciting new approach to traditional music, acknowledging tradition whilst also developing it in a contemporary way.