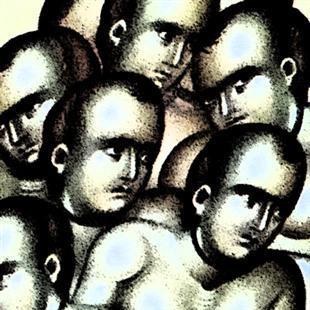 Strange Men From the East is an interesting proposition from Stuart Robertson. At only just over 30 minutes long some of the 15 tracks feel like brief vignettes rather than full blown tracks, but the overall effect is quite charming and intriguing.

The accordion is prominent throughout the album, and is played in a variety of styles. The opening track, Placa Ul, sees it paired with glockenspiel, to create a quirky, fun track that gets the foot tapping. At times it seems to echo a fairground ride, at other times the Croatian street it seems likely to be named after.

That feeling continues on Great Michael where we are treated to some classic accordion oom pah pah bass. But Yefe Nof then takes things in a different direction. The title refers to a neighbourhood in Jerusalem, but there is not an obvious klezmer or Yiddish thread to the track, just glockenspiel to the fore and some lovely rhythmic acordion.

Three tracks on the album are named after Lipnic, a city in Moldova. It seems strange to be drawn to visit a place purely from music composed about it, but the excitement and warmth in these tracks is enticing. Although 5am, Lipnic is a drowsier affair, perhaps after the excitable Penultimate Night in Lipnic?

The Upstairs unexpectedly introduces piano to the album after four tracks of accordion and glockenspiel. But Stuart gets away with such a changes purely by giving the listener a quite beautiful, contemplative track.

Bravery Pill tries this trick again, introducing vocals in the penultimate track of the album. It’s a very chilled out, almost ambient piece, and it’s not immediately obvious quite how it fits into the album. But in listening to Strange Men From the East the listener learns to expect the unexpected and become absorbed in the musical journey.

Elements of Strange Men From the East are reminiscent of film soundtracks, veering from the theme to Withnail and I, to the whimsy of Amelie. It is an eclectic mix at times, but an enjoyable listen.

Released on Morlancourt on 3rd March 2014