Mary Black - Stories From The Steeples 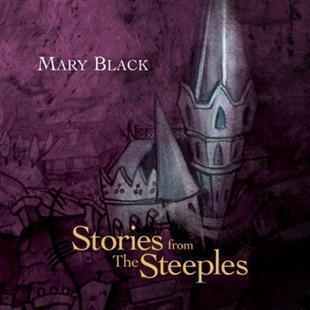 Mary Black’s latest album, Stories from the Steeples, has all the expected stellar qualities of a Mary Black production. Every track tells its story with power and strength. These are simple yet poignant tales of love and loss, interpreted by Black through the powerful instrument of her voice. As always, it is the voice that stands out above all, supported masterfully by keyboards, strings, fiddle, accordion and guitar in a band led by Bill Shanley and Pat Crowley.

Black’s is a voice in the league of one of her own heroines, Sandy Denny, and other great female vocalists including June Tabor and Joan Baez. It’s a voice that changes its timbre and character in keeping not just with each song but with the changing moments of feeling within the song. She can be gentle when singing about the end of a love affair or the death of young men at war, yet robust and vigorous when singing about the life of a lonely traveller. She is the consummate interpreter of an individual’s tale, and she brings clarity and pathos to each story she tells.

Followers of Mary Black will recall her heartfelt version of the traditional ballad Anachie Gordon which was, in fact, the first song she recorded. Black says of the first track on Stories from the Steeples, Marguerite and the Gambler, that what initially drew her to it was its similarity to Anachie Gordon - however “that’s where the similarity ends”. With its jaunty catchy tune, only after a few hearings does the tragedy of the ill-fated lovers Marguerite and her gambler, become crystal clear to the listener.

On Mountains from the Sea she duets with Imelda May, one of her favourite singers. She utters the opening words - “working coast to coast” - with a visceral strength that immediately signals that this is going to be a gritty song of determination.

She also duets with Finbar Furey and Janis Ian, as well as interpreting songs she knows through other singers, Dolores Keane and Chris Matthews and Julie While. Her version of Eric Bogle’s All the Fine Young Men, an elegy to those who died at war, uses the support of accordion to invoke a feeling of deep sadness. This collection of songs brings together friends old and new, absent and present, and has a companionable feel to it.

And not just friends but family too. Many of the songs are written by contemporary Irish songwriters, including three works by her son Danny O’Reilly. O’Reilly’s work is some of the most moving on the album, and Mary Black more than does it justice. Faith in Fate is a lament about lovers breaking up and Wizard of Oz is a sensitive and intelligent tale of the scarecrow’s, lion’s, tin man’s and Dorothy’s search along the yellow brick road. The Night is on Our Side, also by O’Reilly, features all three of her children on instrumental and vocal support.

If there is one criticism to make of this album, it is of its consistent quality! The downside is that there are no especially compelling songs that stand out above all the others. If you are a long-time Mary Black fan, think back to your favourites - perhaps Columbus or No Frontiers or Ellis Island or The Loving Time. These are songs that stay with the listener.

Stories from the Steeples has a different flavour to it and signals that Mary Black is in a new phase of her career. It’s a welcome addition to the Mary Black collection, and leaves us expectant and wondering already about what will come next.

1. Marguerite and the Gambler
2. The Night was Dark and Deep
3. Mountains to the Sea
4. Faith in Fate
5. Steady Breathing
6. Walking With My Love
7. All the Fine Young Men
8. The Night is on Our Side
9. Lighthouse Light
10. Wizard of Oz
11. One True Place
Bonus Track: Fifi the Flea