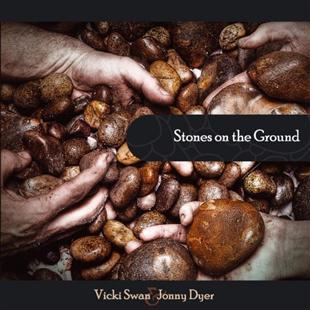 Stones On The Ground is the fourth offering from duo Vicky Swan and Jonny Dyer.

Unlike their previous albums, which have tended to feature either tunes (2005’s Scatter Pipes) or songs (2007’s Slip Tease), Stones On The Ground has both. Showcasing both self-penned tunes alongside traditional songs over new melodies, it blends traditional UK folk music with a distinctly Swedish flavour thanks to Vicki’s skill on the Swedish nyckelharpa.

Opening the album is a beautiful version of the Cecil Sharp-collected nursery rhyme Billy Boy, with a melody composed by Jonny (who has even written a few extra verses) and featuring the aforementioned nyckelharpa.

Another highlight is Herr Hillebrand and Proud Lena. At more than eight and a half minutes long, it is a violent medieval murder ballad translated from the original Swedish by Vicki and rearranged by Jonny.

Alongside the English traditional songs En Gang / Singi Sunset, sung in Swedish, nestles comfortably thanks in part to Vicki’s soft and low voice and the harmonies created by the nyckelharpa and piano.

The tunes on the album have largely been composed by the duo themselves, and have been written in celebration of births, new guitars and the passing of a local pub!

On Jonny’s Valnötslångdans Vicki manages to duet with herself playing smallpipes set in both D and A, while it is his The Cedar Fence and Three Legged Rant which pushes itself to the fore and lodges itself in your memory. Played on the nyckelharpa, accordion and piano and with percussion from Bellowhead’s Pete Flood, its rhythms are hypnotic and the tune will have you humming it long after you’ve put the album down.