Stick In The Wheel - Stick in the Wheel 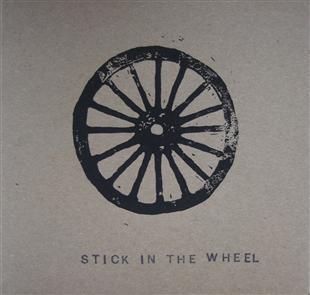 They call it ’Welshy Cornish Cockney Folk Music’. They say they don’t wear waistcoats. Who are they? They don’t even provide their full names. Nic, Rachel and Ian are Stick in the Wheel.

There is a pleasingly raw, simple and authentic sound to their music. Listening to Stick in the Wheel’s first self-titled EP that was recorded in their kitchens, it feels like arriving in a remote rural village, and coming across some musicians by chance who grab your attention. ’We are folk singers not singers of folk songs.’ The minute you hear the first note on the dobry, autoharp or fiddle and the first unpolished, true voice, you know you plan to stop and stay.

Arrive without expectations and immediately know that this sound goes right to the heart of what folk music is all about.

Stick in the Wheel take a minimalist approach to promotion. They don’t even list the instruments they play. ’Nic and Rachel write, sing and play. Ian writes, plays, records and produces.’ They don’t need to, though it would be nice to know. The sound speaks for itself.

Each song has a passionate intensity that is amplified by the lack of production. There is a true sound and feel to the recording, with no frills. It’s like they’re in a front room performing, a few inches away.

The familiar folk song, Bows of London, is played with vigour and with energetic banjo and fiddle accompaniment to the commanding voice. The song is a dark, tragic story of a girl who pushes her sister into the water to drown; a fiddle is then made out of the dead sister’s body. Rachel sings with insistency and pace. Her voice moves from an almost jaunty edginess to a softer tone, as the story unfolds.

In Over Again, the refrain ’over and over again’ is captured by the strings repeating themselves almost unendingly behind the voices, creating a mesmerising sound.

The title song, Stick in the Wheel, is slower and more reflective. Fiddle, dobry and voice interweave on this original composition. When the voice falters with a true note that is slightly imperfect, this simply adds to the attraction.

Look Here, the final song of this tantalisingly brief EP, is a melancholy story about a woman on the run, a dark brooding piece of music. The supporting strings and the harmonies evoke the feel of an Appalachian folk song.

In four simple songs, Stick in the Wheel have proved their ability and created a sound that lingers after the last note finishes. This EP is a taster. The main course is yet to come.

Available as download or limited edition handmade CD through Bandcamp