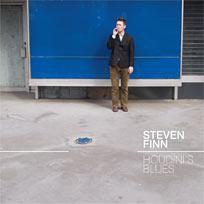 Steven Finn has had an interesting career. After recording and touring successfully with Andrew Dinan and Flook’s John Joe Kelly he played guitar for Emiliana Torrini.

His début solo album Houdini’s Blues could hardly be more solo. With minor exception, throughout the CD he plays either guitar or harmonica as the only accompaniment.

The first two songs are sparse and only fleeting instrumentation breaks up the yearning and affecting vocal delivery. With track three things liven up a little but only briefly, it still sounds like a despairing and whiskey-drenched 3 o’clock in the morning.

Steven Finn’s taken on the American folk style drew me in with it’s disarmingly intimate presentation and there’s no denying its power. This starkness is both it’s greatest charm and eventual downfall. It draws you in, but in the end serves to highlight the lack of variety on offer here. With only 9 tracks it still struggles to maintain interest until the end.