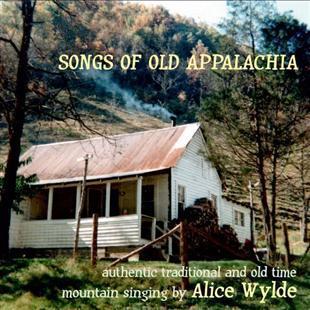 The material is firmly in the Appalachian ’old’ tradition and provides an interesting tour through the genre. Alice Wylde’s pedigree is impeccable, born in the heart of Appalachia and with the album cover featuring the house in which she was raised.

The album is made up of traditional songs that are sung solo by Alice and accompanied by her finger picking instrumental style. There is a real sense of authenticity and authority in the music that evokes a distinct sense of place and time.

The vocal style may not be to everyone’s taste but is a good fit to the material and genre, particularly on the opening West Virginia Boys. The a capella Shiloh’s Hill is a powerful piece of singing that works well without accompaniment.

Several of the other songs don’t stand out in quite the same way, with Unclouded Day, Heart of Glass and Johnny Doyle perhaps struggling to live up to the same standard.

Songs of Old Appalachia showcases a distinct and deep folk tradition that may not be familiar to many listeners in the UK.