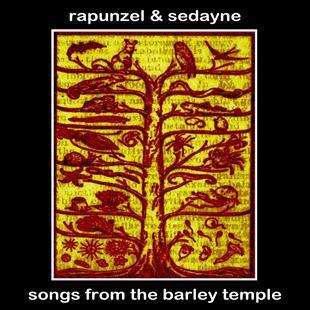 Fleetwood, Lancashire-based Rachel McCarron and Sean Breadin are better known as Rapunzel and Sedayne. Following from their recent involvement in the well-regarded Oak, Ash and Thorn project, Songs from the Barley Temple is a new album mainly comprising traditional material with several new tracks from the duo. There is certainly plenty of material here with a total of 14 tracks featured.

Songs from the Barley Temple has an ethereal and haunting tone, medieval in spirit, yet sounding curiously contemporary at the same time. The songs feature skillful and powerful vocal harmonies with sparse instrumental accompaniments that create an occasionally disconcerting yet compelling landscape. Banjo, fiddle and cwrth (a medieval lyre) mesh well with the innovative use of a Korg Kaossilator synthesiser to provide interesting and distinctive drone effects.

Housecarpenter/ I Curse the Day showcases Rapunzel’s emotive vocals with background drones and instrumentals to create a truly eerie atmosphere. Riverdance weaves together strings and drones with harmonium to lend a timeless feel to a gloriously sung lament. In contrast, Outlaws is a far more modern piece, setting to music a 1930s poem by Bonnie Parker, of Bonnie and Clyde fame, whilst in Diver Boy Sedayne’s powerful vocals are given the opportunity to shine through.

Never less than fully engaging, Songs from the Barley Temple is an album of rare quality.