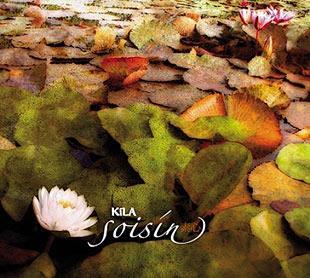 For their ninth album, Irish traditional/fusion band Kila have certainly channelled their softer side, producing an album that is in perfect counter-balance to their previous Gamblers’ Ballet released in 2007.

Soisin is names after, and dedicated to, a young Dublin woman, Máire “Soshin” O’Halloran, who travelled to Japan to join a Zen Buddhist monastery. Three years later she came to be regarded as a Buddhist Bodhisattva or saint of compassion. Meaning pure heart enlightened mind, Soshin is the English phonetic spelling of her given Buddhist name.

While touring in Japan Kila flautist Colm Ó Snodaigh heard her story and was inspired to write the tune Soisín, which in turn inspired the whole album.

With roots in traditional the Irish style, Kila’s music features gorgeous melodies driven by a serious rhythmical undercurrent. All of the compositions on Soisin weave a myriad of influences into tunes that are not only melodic and relaxing to listen to but show that world music doesn’t always have to be bulky and unwieldy.