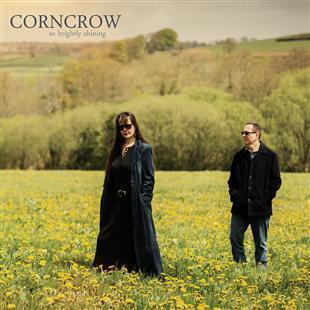 The South West of England plays host to many local music traditions and it is thanks to groups such as Corncrow that word spreads of their continued importance within the wider traditional music scene. So Brightly Shining is the intriguing new album which invites listeners to take a journey to the county of Cornwall and experience the charm of this local traditional music.

Duo Kim Guy and Steve Hunt celebrate the heritage and evolution of Cornish folk music and seek to challenge its confinement to the past. The album, with its mystical feel throughout is not only a fantastic listen, but a real eye opener to the hidden gems of the South.

The album looks back at Cornwall’s wonderful folk club scene which although not as vibrant as it once was, was (and still is) infamous for many magnificent collections of songs and tunes. However, the duo does not shy away from modern technologies, meaning that many of the tracks on the album are treated to a variety of new sounds and effects. It is a case of the new enhancing the old, and with undeniably superb results.

The duo are certainly enchanting singers but the listener may also be impressed with the amazing range of instruments that appear throughout the album. With Kim Guy on keyboards, recorders, acoustic guitar, vocals, kazoo and percussion and Steve Hunt on guitar, ukulele, bouzouki, kazoo, banjo, vocals, percussion, harmonica and bodhran it is safe to assume that throughout the eight tracks, there is never a dull moment. The use of the recorder is particularly noteworthy, giving a slightly medieval sound to the album and creating the perfect atmosphere for an album bursting with tales and folklores.

So Brightly Shining is set at a rather gentle pace with only a couple of tracks providing contrast to this. The Road To Marazion sees simple percussion and a capella vocals teamed with the odd blast from a nearby harmonica.

Meanwhile in Mariasek the combination of echoing vocal effects and the hauntingly beautiful traditional Cornish language makes for a mesmerising track. This, as well as the inclusion of songs from Clive Palmer and Cyril Tawney - who both played huge parts in the Cornish folk scene and its revival - highlights Cornwall’s striking cultural and musical identity on the map.

The duo work as a tight unit, presenting to the listener polished harmonies whilst weaving around them are unique instrumental arrangements and ideas. With such a variety of techniques, there is really no knowing how the duo will have arranged a song or tune, adding excitement and interest to the album. For example the short but delightfully sweet Pike Street Rag with its air of joviality and surprise kazoo entrance, confirms Corncrow as masters of the redefinition of Cornish folk music.

So Brightly Shining is the perfect accompaniment to drifting minds and vivid imaginations. For anybody with an urge to delve a little deeper into local traditional music, this album is well and truly a must listen.