The Woodbine & Ivy Band - Sleep On Sleeping On 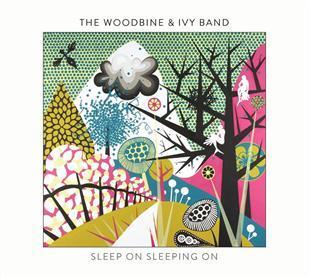 After the sad demise of the Folk Police record label, a second album from the Woodbine and Ivy Band always looked like a remote possibility. Surely lightning in a bottle couldn’t be captured again? Happily, Phoenix-like, the band have reformed out of the ashes and returned to beguile the listener with music that knows no boundaries.

The album and its title is partly derived from Gurdjieff’s theories on waking sleep. The ten tracks, especially the three instrumentals, seem to exist at the threshold of when sleep turns into wakefulness. Certainly, the title piece with its swooning pedal steel guitar and dreamy trumpet over a shimmering synth and cool female vocal, is very evocative of a lazy hot summer’s afternoon spent dozing by a lake or stream.

The second track, Arm a Nation, doesn’t immediately shatter the calm but as Jenny McCormick sings about the complexities and hypocrisies of the arms trade the music gains in power and intensity, helped immensely by John Ellis’s Hammond organ accompaniment and solo in the extended coda to the song.

White Hare, the first of three traditional songs, follows. This is a much more robust piece with heavy guitar and brass (playing a riff guaranteed to burrow its way into your brain) supporting James Reynard’s singing of this 19th Century hunting song. As this is 2015 the hare escapes to live another day.

A 6/8 guitar pattern is the basis of Jackdaws, a gentle pastoral instrumental which begins and ends with the sound of the titular birds recorded early one morning in a small wood next to the Bridgewater Canal in Manchester. It’s a pleasant piece but one that doesn’t linger in the mind.

We’re back in the world of sleep with Pretty Fly Lullaby. This song is taken from the only film directed by Charles Laughton, The Night of the Hunter. This is a haunting and slightly disturbing track, sung with great sensitivity by McCormick.

Minstrel and a King is the centrepiece of the album. This is an almost nine minute version of the song written by Gerald. T Murphy and performed by Heron on their second album. This is a celebration of 70’s prog rock with jazz overtones. The Hammond organ sound is reminiscent of early Genesis circa Trespass and is all the better for it. Once again, the song has an extended outro which builds in excitement and emotion before fading into a lovely guitar coda.

Lal Waterson seems to be a touchstone for a new generation of performers and she is represented here by Flight of the Pelican co-written with her son, Oliver Knight. The strange and mysterious lyrics sung by McCormick are accompanied by acoustic and pedal string guitar. Another song lost in dreams.

One Summer Day is the final instrumental piece. An extended jam, this is the most jazz-like piece on the album. There’s another great Hammond solo by Ellis and a catchy riff played by the brass. The piece doesn’t add up to much but it’s fun.

There follows a lovely rendition of the traditional song, Death and the Maiden. This is a stripped down version reimagined as a conversation between oneself and one’s aging self, hence the retitling to Old Man. Arranged and sung by Raynard the accompaniment mirrors the format of the song being a dialogue between two acoustic guitars.

The album is brought to a close by the American Civil War song, Rebel Soldier. The lyrics in this piece talk about loneliness and loss, dislocation and death. This makes for a suitable companion to Old Man and is an excellent choice with which to close the album.

In many ways Sleep On Sleeping On defies catagorisation. At first listen, the album seems too fragmented, stealing magpie-like from folk and prog rock, jazz and traditional music. However, look under the glittering surface and you’ll find a tightly-focussed record looking both back to the past and, as the 3 Mustaphas 3 used to say, going forward in all directions.