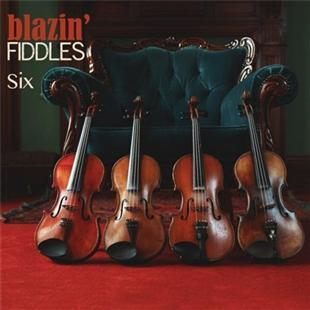 Blazin’ Fiddles is a band right in the spotlight of the Scottish music scene now, after recently being crowned as Folk Band of the Year at the MG Alba Scots Trad Music Awards.

That’s not to say that everything you’ll hear in Six is strictly Scottish, however. This record features inspiration from a variety of sources, from a Scandinavian style waltz in Mama, Come Let’s Dance to the Eastern European twist of the final tune, Bulgarian - which, incidentally, came from an American band.

Particularly eclectic is the interestingly named The Diplodocus. This track boasts three tunes, the first two of which sprung from the Irish pens of Mairtin O’Connor and Liz Carroll respectively, and the last of which is a traditional piece from Quebec. The latter, curiously, was written to commemorate the birth of quintuplets, with one part within it dedicated to each child. From the sound of the tune, it was a lively household!

Of the tracks which do have Scottish roots, the credits read like a who’s who of Scottish music. Colgrave Soond, for instance, features Shetland Reels from some of the Shetland Isles’ best known composers- Willie Hunter, Bobby Tulloch and Ronnie Jamieson. This is a particularly fast paced piece, and with all those fiddles around, you can really imagine the bows flying along as you listen.

With five fiddles now on board for the band, you could be forgiven for expecting a lack of range, but this is taken care of by the variety of genres, time signatures and paces which are found within each track. Struy, for example, begins with a moderately paced 3/4 march, quickens and progresses to 2/4, and finally evolves into an even brisker quick step - and all contained within one set.

The piano also introduces a different character to each piece, as well as adding balance to the otherwise string-heavy band. The very first set, The Lads Like Beer, is lent an almost classical feel towards the end as the strings weave harmonies and the piano takes centre stage, with a grace which is quite at odds with the track’s title.

Overall, this is an album which will interest pure Scottish music fans and the wider folk world alike, and there’s plenty to get your teeth into. If you’re a fan of a good fiddle tune, this could be the album for you - after all, in what other band could you find five fiddles all in one place?